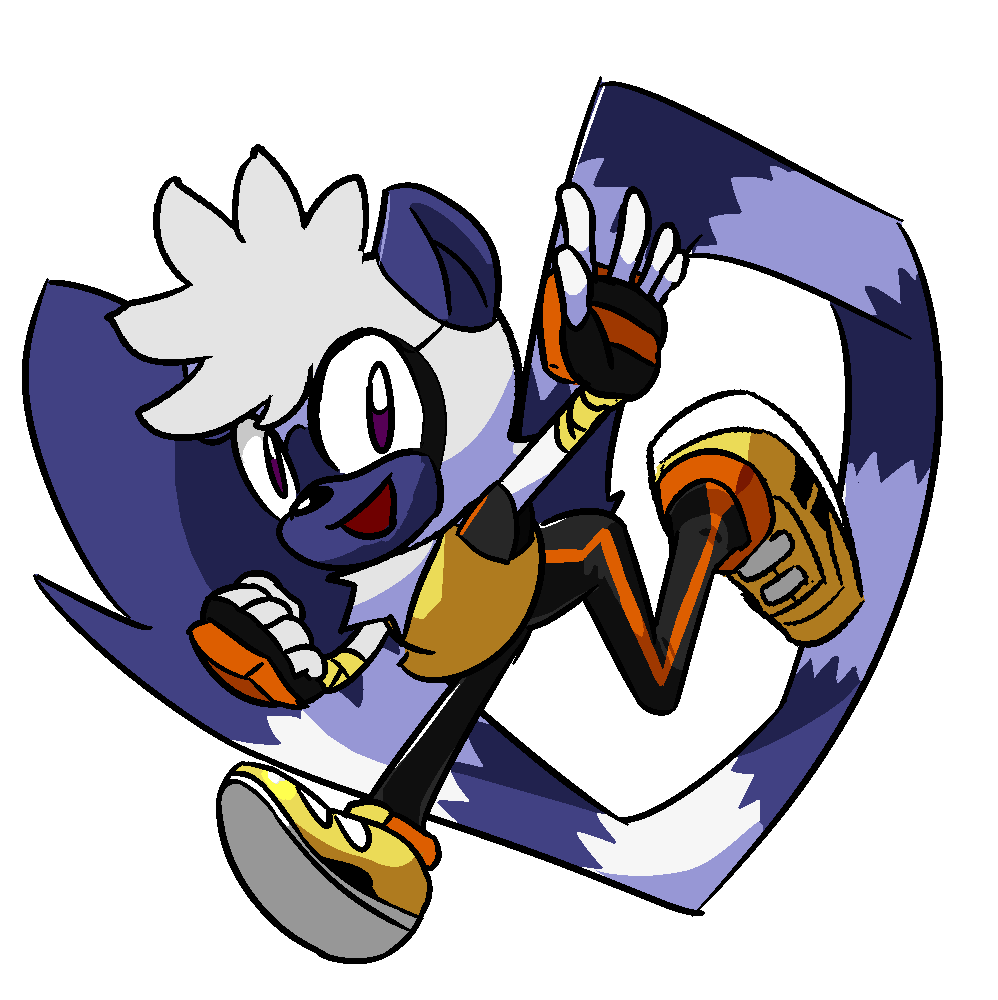 Well well well, here we are, finally, after all this time, did you know this was the first mod I started working on coming back to SRB2? Because of that the sprite quality is a little poorer compared to my others, but I'm sure you can overlook that c;

Tangle the Lemur is an IDW character from the Sonic comics, she's a springy athletic girl and very agile with a very long prehensile tail and now she's here for SRB2!

Luckily for you all she's pretty simple to pick up, but hard to master, you might find it a little awkward at first, but persist and you'll be spidermanning all over the place!

So, her abilities? Pretty simple actually

When you're walking around and there's nothing to latch onto, you have a triple jump at your disposal, simply jump after you land to jump higher, up to two times! You do have to get a bit of a run up first though, so make sure you have enough room.

Pressing the spin button while grounded, without holding a direction allows you to extend your tail, you can latch onto nearby walls, break spikes or attack enemies, the longer you hold down the button the further you extend your tail, but the longer it has to reel back.

Jumping and pressing the spin button without inputting a direction will send your tail downwards, letting you anchor yourself, or pull yourself down quicker.

Holding a direction and pressing the spin button while grounded anchors yourself down, this might sound a bit funky at first, but it allows you to quicker break, or change direction and spin. If you're anchored you can boost yourself with a spin, you can even use this to get a big jump.

Now the meaty bit, holding a direction in the air and pressing the spin button (or jump button, if you have a shield) allows you to send your tail out to latch onto walls and ceilings in the direction your camera is facing, be mindful that you cannot grab onto unclimbables, you get no grip!

Make sure you hold the button otherwise you'll fall, but be sure to time your releases to use your momentum to fling you were you want to go.

If you let go as you hear the "-boing-" near the bottom when you're hanging, you can pull yourself up. If you're grounded, let go at just before the apex of your jump and you'll pull yourself up an extra bit. It takes some getting use to, but it'll help scaling walls on Kunckles routes should you opt to take them!

You can also grab onto friends too! With varying degrees of success, fly across chasms with Metal! or drag tails down into chasms! weeee! You can also disable this with "tanglepickup" if you want to disable this.

I hope you enjoy bouncing around with Tangle!

Oh and as an added bonus, a nice little pack of custom colours made just for Tangle

If you want to get a nice 2 toned colour just for Tangle, I reccommend the following ramp

--Credits--
Spriting - me, yoho!
Coding
Triple jump, early tail code - Bloops, thank you for trying your hardest to make the tail, but you did a good job with the triple jump and getting the sprites where they need to be
tail code - Lach, thanks for taking your time to make what you did for me when noone else would, you did a good job getting the skeleton for Tangle and getting her feel down god
tail code+ and everything else - SMS Alfredo, thank you so very much from picking up Tangle from the dev hell she was stuck in, Lach is a very busy person and taking a load off of him helps a lot
Super Colour - Frostiikin, yep, Tangle has a super, and frostiikin helped put a nice colour together for her, thankies
Chrispy - Sprite assistance, while Chrispy didn't sprite anything specifically, he did guide me very early on and help shape how she came out, thanks!
Nibroc.rock - Reference material, thanks bub, you're always helping me with them dodgy angles
And everyone else on the various discords who helped me test her in servers c;
Reactions: RedSRB2, SusSped, xxBeanGirl420xx and 30 others

It's a fantastic character to play as. Tangle might feel more at home with her best friend whisper the wolf
Upvote 1
Like one or other has said, at first it's hard to pick up the abilities and tricks, but once you get used to it's hell of fun and worth showing off on servers.
The only thing I haven't mastered yet is being able to get unstuck from a quicksand quickly.
Upvote 0
My god, Tangle knocks it right out of the park with probably the most fun movement options I have seen any other characters do. Playing your nifty cards right with Tangle is greatly rewarded and careful consideration was put into that tail, let me tell you.

A good or great grapple across the walls or ceilings FLINGS you away at high speeds where I constantly feel like "Man, would it be great to have sections dedicated to this sort of moveset." Some Knuckle paths allow for some crazy shenanigans to unfold, and if the level allows it (which it mostly does), you really can get a lot of mileage out of Tangle when you get over that initial barrier of figuring out when and where to fling your tail. Yet I bet there is some very, VERY good potential here for exclusive long winding parts with grapple spots.

Where the character loses its appeal happens somewhat towards cramped, focused platforming challenges where a previous setup for speed was not really possible. Especially around trying to reach a bit too high sector with Tangle is proven to be a slog. Either a double jump needs to be executed from a far enough distance to clear the height, or a good enough grapple towards the wall. If that is what you're doing for the majority, the level drags on for a bit and I would rather switch to something else to clear these gaps faster.

Neitherthanless, Tangle is effort downright awesome and what you got here is really something special. If the level allows for it, man, is it a gem to play.
Upvote 0
Amazing mod. Tangle is really fun to play as, the controls are a bit difficult to get used to, but that's the nature of her character. I had a very fun time playing with her
Upvote 0
tangle is so fun to swing around and play with, she is definitely a character i'm gonna enjoy playing for a while, until i inevitably burn myself out with them like i did with skip and rchars
Upvote 1
Tagnel L emur .
Upvote 0
Tried it out, it's awesome! Now i can reach higher areas with my tail! Anyways, I would recommend this mod. as Amy once said, "Cool, sweet and catchy!"
Upvote 2
Oh, how I've longed for a proper grappling hook-esque character in SRB2, and my prayers are finally answered with the lovable lemur herself. Had an absolute blast playing her for the first time with a buddy and I love how many skips and shortcuts she's capable of!
Upvote 0
Wow I was about to ask about why didn't anyone make a Tangle the Lemur mod yet? This one is sick, even better than what I imagined.
Upvote 1
She is difficult to use, but when you get used to the abilities is very fun, she is a great character
Upvote 3
Read more…
Top