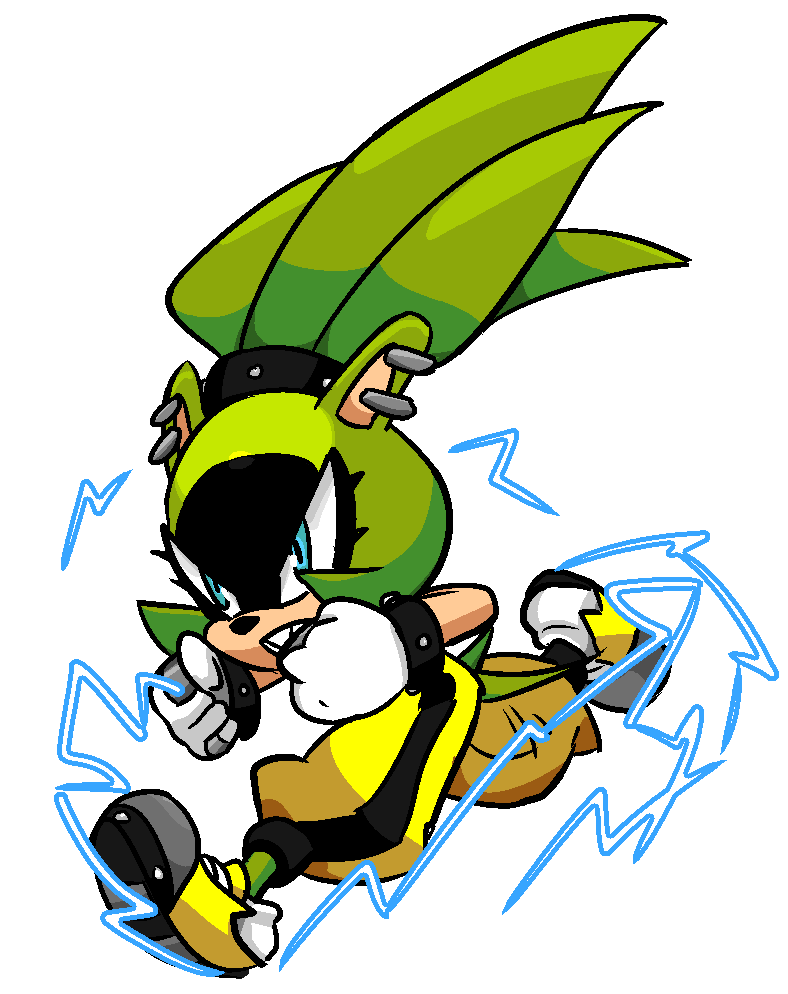 Surge the Tenrec is bolting in from the Sonic IDW comics straight into SRB2!

Surge is rather skilled with her powers of Electricity, allowing her to charge herself up to enhance herself and her moves to clear zones faster and/or easier.
Be mindful of water though, that'll weaken your abilities.

So how do you build charge to enhance yourself? There are a few ways, but the most common you'll come accross are destroying badniks, or fulling charging a spindash!

(You can only have one charge on at a time, you cannot stack these)
(Keep in mind that you can lose your charge should you take damage or come in contact with water.)​

(use the command surgequakes to disable screenshaking caused by surge)​
Click to expand...

So now that you have this charge, what can you do with it? Lets take a look at her abilities, and we'll get into that.

Without a charge, you have a relatively simple double jump, similar to the Electric Shield.

Pressing spin in the air will allow you to home in on enemies, similarly to the Magnet Shield.

With a charge, however, your homing attack is replaced with the Volt Dash, allowing you to get a big burst of speed capable of breaking bustables and spikes, like a super thok, you can also double jump after using it.

"But I want to chain homing attacks, but I'll just keep flying off, wont I?"

True, you would, but you can hold down Custom Button 1 to remove a charge for whatever reason you'd want, maybe you want a small double jump instead of the volt jump? Regardless, it's there if you want it, but Surge is perfectly playable without custom buttons set up.

"Why would I even want to keep charge anyway? I can just zip off and be done with it!"

You could, but keeping ahold of your charge instead of using it gives you a small buff, when you have a charge, you gain a small jump height increase, speed boost and water running! You'll even leave a lingering damaging trail behind you.

(Yes, this speed buff can stack with speed shoes)


"Other Surge players keep destroying all the badniks! I can't get charge enough!"

Not to worry, Surge can gain charge from almost any electric attack in the game, this includes her trail, simply make contact with it and you'll be granted a charge.

There are many other places you can gain charge, electric and magnet shields for starters will give you a charge on collection, and you'll be granted a charge every few seconds. Remember you can press or hold CB1 to ignore this charge.

Surge also has xmomentum, Kirby & Milne Dance support, I hope you have fun with her!

And credits, we can't forget these!

Surge is really fun to play as, she's become my new favourite character in SRB2! Finding new ways to chain charges and keep the flow going is so much fun and has made me revisit a lot of levels which is always fun. Every part of this mod is made with so much love & care, it's incredible and I feel that everyone should give this a try!
Upvote 0
This is just too good. her moves contrasting sonic was done well. your not even good enough to be my fake. FAKER!!!
Upvote 0
There's a lot of things that I could say here that others have said, like how fun this character is, or making comparisons. But honestly, the thing that sticks out the most to me about Surge is that she just feels satisfying to play as. It's not just the abilities or how she handles, but the culmination of mechanics, visuals, and audio that just...feels GOOD. I know that's saying a lot without saying anything, but hopefully the point comes across.

That being said, I do have one criticism that a lot of people have also mentioned. I like the ability to stay decharged to use a regular double jump or a homing attack, but...holding custom 1 down is just awkward feeling. I feel like giving an option to make it a toggle instead could probably go a long way in helping with that.
Upvote 0
Excellent spritework, and her charge mechanic is excellent. I think giving her a double jump at base was a mistake, though; gaining and expending charge would be much more satisfying if it was her only way to gain extra height.
Upvote 0
Credit when credit's due: This character is actually pretty fun for me to use, essentially being a mix of the Lightning Shield and the Attraction Shield (two of my favorite ones to use). One thing I would suggest, however, is to maybe slow her down a bit when she's fully charged because when she goes super fast, it makes her kinda unwieldy.
Upvote 0
An EASY 10/10. THIS MOD IS AMAZINGGGGGGGGGGGGGGGGGGGGGGGGGGGGGGGGGGGGGGGGGGGGGGGGGGGGGGGG
Upvote 0
Extremely cool character, I really like all the interesting ways you can traverse levels with her kit. Only real nitpick I have is that I wish turning super was mapped to a different button, since it can cut off your ability to use the Volt Dash and Homing Attack, but other than that I found her to be great overall.
Upvote 0
Always nice to have more side-media Sonic chars represented. The spritework is quality stuff, as well as the sound design - the different sounds and effects for charging a spin dash were a nice surprise.
While the abilities themselves are are fun enough to use, and having to upgrade to keep the stronger variants is a cool concept, I feel it doesn't quite come together as well as it could. The second-tier abilities feel more like an alternate set of moves than straight upgrades (the enhanced double jump sacrifices mobility, etc) which paired with how easy it is to restore charge, makes the whole mechanic feel inconsequential.
If I were to recommend changes, it'd be to have the second set of abilities feel like something you have to maintain having access to, rather than something you switch on and off for different parts of a stage.
Upvote 0
Surge is fantastic! This reminds me of Inazuma and Modern sonic combined, her ability's are fun to play around and the best part is that Surge can use both of them in one jump. I love how you based her abilities off of the attraction shield and thunder shield, both are very useful and fun. Charging up however, is a game changer, yet possibly annoying. Having to press custom 1 every time when you want to chain a homing attack gets annoying quickly. Although running faster, jumping higher, stronger dash... Surge is too powerful! I know there is nothing you can do about the homing attack chain problem so I would still like to rate this 5 stars, great job on this character project!
Upvote 0
One of my favorite mods to come out for 2.2 everything compliments each other really well and she's super fun to just run around as. My only and i mean ONLY nitpick is that you can't hold your homing attack to launch off of vertical springs. Instead you homing attack the spring and fly straight up killing all momentum(unless i'm wrong and just not doing something right) Other than that she's definitely in my top 3 favorite character mods
Upvote 0
Read more…
Top