Uhh... I think there's been a mistake. 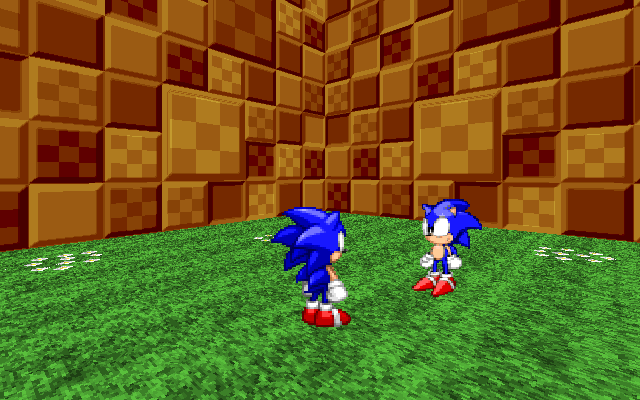 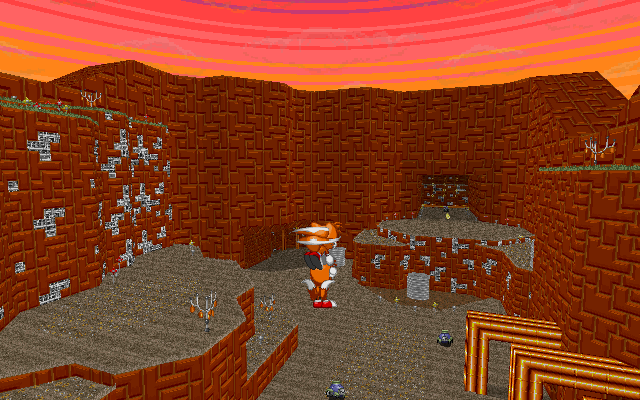 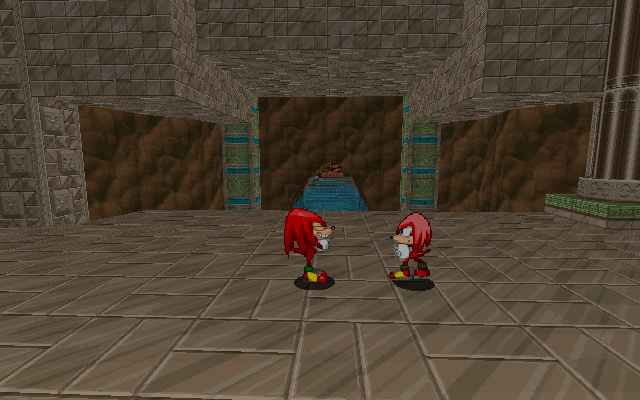 Remember these guys? They are back and better than ever!

With the courtesy of the art of the one and only SSNTails. As for Knuckles, Chrispy did his part. (Though I used a wad with a HiRes playable version of Legacy Sonic and ports of Legacy Tails & Knuckles that already exist as bases to ease up things for me... *COUGH*)

Don't worry, they play a little bit differently from the vanilla trio. Or the ports that we already have, for that matter.

Also comes with a port of Legacy Sonic that plays like himself 2.1 for the most part. (I made it myself too.)

Ability: Just like old, old times, he can thok multiple times. This make him more powerful than the actual Sonic.

Name origin: Obviously, his sprites are hand drawn edits of Sonic's pre-rendered sprites from the cancelled Saturn game, Sonic Xtreme. Must've had a buttload of effort.

Ability: He can fly like vanilla Tails does, but can't swim like he should. He can sprint on water, which is nice. It's actually an obscure thing from the past of the game itself, but it was removed from posterior versions to match the official games more.

Name origin: Most of his animations make him seem like a bunch of modified Sonic sprites. That's about it.

Ability: He can glide and climb as you would expect, but doesn't crouch by stopping. A little bit like previous versions. (Thanks, Azeon!) Also, he can't bust some walls by touching. Seriously, that thing's a flag now.

Name origin: He's a result of finished sprites to replace the pre-rendered ones from a few pre-2.0 versions. The Chrispy part is because that Chrispy finished what SSNTails started last decade. Speaking of which, the Marriage part comes from the fact that 2.0 came out right after SSNTails got married! That's why 2.0 is also considered as 'Marriage Edition'.

SSNTails and Chrispy: The sprites

Azeon: The script that doesn't let Chrispy Marriage crouch nor slide by stopping himself from gliding. Taken straight from GXP3000's UglyKnux port.

[unknown]: The NiGHTS sprites for Less Unique and Chrispy Marriage, originally from SRB2Riders, an EXE mod that's quite old, if you ask me.

Wait, what the devil is this? 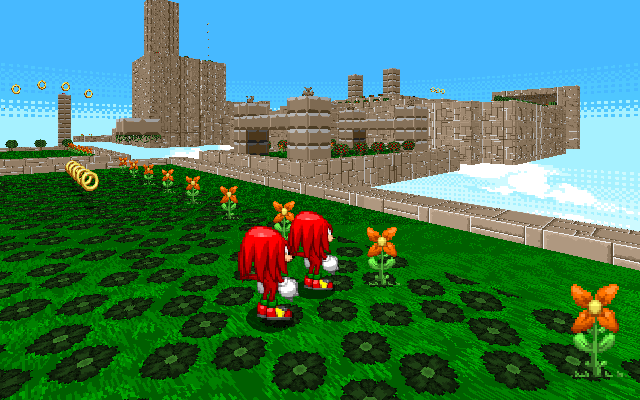 Old post:
He is the core of the past. He came back to the depths of his past countless times. When the future came, it was time for him to seal himself away. But what if he decided to... Return?

Yea. You read it right. Pre-2.2 Sonic. With the courtesy of the art of the one and only SSNTails. (Though I used a wad with a HiRes playable version of Legacy Sonic as a base to ease up things for me... *COUGH*) If Earless can take a visit to the future, why not Hand Drawn?

He plays EXACTLY like Vanilla Sonic would. Uncontrollable speed, Thok, and everything you feel to know and love. Except with the old drawings, old graphical spindash behavior, mid quality animations for Super Sonic, and stuff like that. It also includes an alternate version with 100% Sonic branding, NiGHTS sprites that don't glow, and the v2.1 description. Rewritten from scratch.

I just made this for fun. It ain't really my property, anyway. It's not like I'm gonna break your legs for sharing it anywhere else.

Update 1:
Told you I'd do it. Made a new default version with another name, another description, Multi-Thok and "proper" Spring and Gasp "animations" for Super Sonic. There MAY be glowing NiGHTS sprites, tho.

Need more accuracy? Ok, I'll cut you a deal. It's in the alternate version, with not-so proper Spring and Gasp "animations" for Super Sonic and the 2.1 description, along with unchanged display name and background color. This one WON'T have glowing NiGHTS sprites. (Even if I changed Super Sonic's spring "animation", so his ears won't move anymore but will stay moving with the movement's wind.)

Update 2:
Rebranded from "[Mostly] Tailless" to "Hand Drawn". ('Cause, y'know, these sprites are all hand drawn Sonic Xtreme sprite edits.) It's basically like the previous version. But, hey, at least this one has GLOWING NiGHTS SPRITES! (Finally.) I just tried my best painting those drill sprites green. Also, the alternate version no longer has any glowing on his NiGHTS stun sprites.

Update 3:
- "Unique" falling animations for Super Sonic
- Super Sonic's ears move again by jumping on a spring in the alternate authentic version.
- Resorted screenshots. Along with a few new ones.

Update 4:
- The super transformation frames now match versions prior to 2.2. This applies to both versions.
- Added the old continue star as the continue icon and proper ending constellation for Hand Drawn (taken from the uglyknux addon lmao). These are NOT in the authentic version.
- lol, I think I skipped a version number.

Update 4.1:
- Screenshot and description changes! That's it. Thanks for over 5k views, tho.

Update 5:
SURPRISE! It's now a pack of overhauled versions of the rest of the legacy characters. Read what's way up above for details.

- Hand Drawn now uses the stats from vanilla Sonic. The alternate authentic version remains unchanged.
- Added Less Unique and Chrispy Marriage to the club.
- Changed the ending constellation to the exact same one from the UglyKnux addon. I don't know who did this, but it's probably GXP3000. All the others share the same thing. If I'm reported for theft because of that, I won't hesitate to remove it.

Update 5a:
- Minor grammar fix on the Main SOC of the characters
- Removed old 1.09.4 glide script from Chrispy Marriage that I forgot to remove in the first place. I was originally gonna incorpotate that into Chrispy Marriage, but, y'know, I gave up on that idea.
- Added a file that add all of the things in just one package! (Authentic Legacy Sonic not included.)

Update 5b:
- Included Authentic Legacy Sonic in the zip. I just about forgot to put it in there.

Update 6:
Brought some small, but significant improvements to the pack. Kasumi-chan has lent a hand.

Update 6a:
- New NiGHTS sprites for Less Unique and Chrispy Marriage, originally from and old EXE mod, SRB2Riders (I don't know who made them, tho.) There may be some color inconsistency.

Update 6b:
Everyone now has their old stats back. That's about it.

(No, I don't plan to use anything from NoChuckles' update that just came out for the time being. Let alone adding support for XMomentum and/or Persona. Not because I don't want to, I just don't know how to implement. Also, NoChuckles already supports both XMomentum and Persona now, y'know.)

Update 7:
Boy, that thing up above aged quite poorly.

-Added XMomentum/SRB2P support for Hand Drawn! Has the same stats as the actual Sonic, tho.
- Removed the Hand Drawn & Less Unique tag addendum in favor of alternate versions for Less Unique and Chrispy Marriage that have the H.D & L.U tag SOC each. Read above for details.

(Yes, SRB2P support is planned for Less Unique as well. But the results I've got trying it were nothing but broken messes, so that's gonna have to wait.)

Update 7.5:
- Everyone has their vanilla counterparts' stats again. Hope you don't mind semi-clones, y'all. Especially if you play Smash.
- I've decided to get rid of the standalone versions by taking a page from ChrispyChars. The true Legacy Sonic will be staying, don't worry.
- Added a Knuckles related meme addon, included in this pack.

(Remember, SRB2P support for Less Unique is still not coming until it's no longer broken and unfinished.)

Update 7.5.2:
- Fixed another screw up and re-added the tag team.
- Fixed the overview section with a download button and a new icon.

Update 7.5.3:
- Since 2.2.9 added the SF_CANBUSTWALLS flag, I just noticed Chrispy Marriage doesn't have it. And I'm gonna let it stay that way. Due to that, I've decided to update his biography to reflect it. Took me a good while to make it look good on both 4:3 and 16:9, tho.
- There's also some changes I forgot what they are. Maybe.
Todo:

Any ability that makes them stand out more from the already released ports and even the vanilla counterparts.