Cacee "Kiwi" Cactus is here from Mirage Saloon Zone! She used to be a bandito, but she's given up her days of crime... mostly. 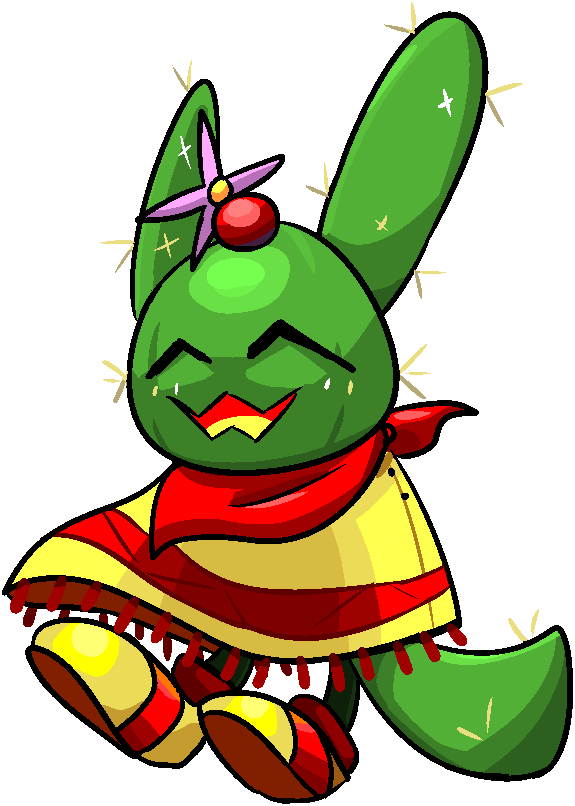 Cacee is a cute lil cactus rabbit made by yours truly, she might look cute but she packs a mean punch, she's also the first proper character I've released since my return to SRB2, padoru excluded of course.

She's a pretty small (and I do mean small) and agile fighter, but she's a nospin so watch out when you jump.


*Spike Rush*
Now before I did say she packs a mean punch, infact she packs several, if it doesn't break the first time, punch it again.

You can also use this to break bustables too.

This is Cacee's jump ability, jump a second time to punch high into the air, your horizontal movement is cut a bit durring the cast though.
Another key thing this ability has is that it can drag enemies up into the air, allowing you to combo enemies if you wish

Comboing this with Spike rush allows you to grant yourself another rising upper mid air, so you can reach some pretty high spaces provided you have a tanky enough enemy, or enough of them to drag with you.

Due to her thorny nature, cacee is completely impervious to spikes, spike pits, spike walls, just not spike balls.
if it's passive she's most likely immune to it, if it's an attack or a general hazzard, they hurt her, it should be obvious what does and doesn't hurt her, if you can walk on it, you're fine, if not, it's probably going to hurt.

Also making contact with enemies also hurts them, but... it also hurts you, so you still need to be careful.

And, here's your fun fact of the day, because Cacti hold so much water in their body, they're one of the most fire retardent plants you can find, I mean they live in a desert, that place is hot as heck.
I'm not saying she's immune to fire though, a cactus must under go routine watering and nuture to retain their fire retardent properties, she can only survive one hit from a fire source once, you're gonna have to wait to cool down before you can tank another, or find a water source to cool off in. 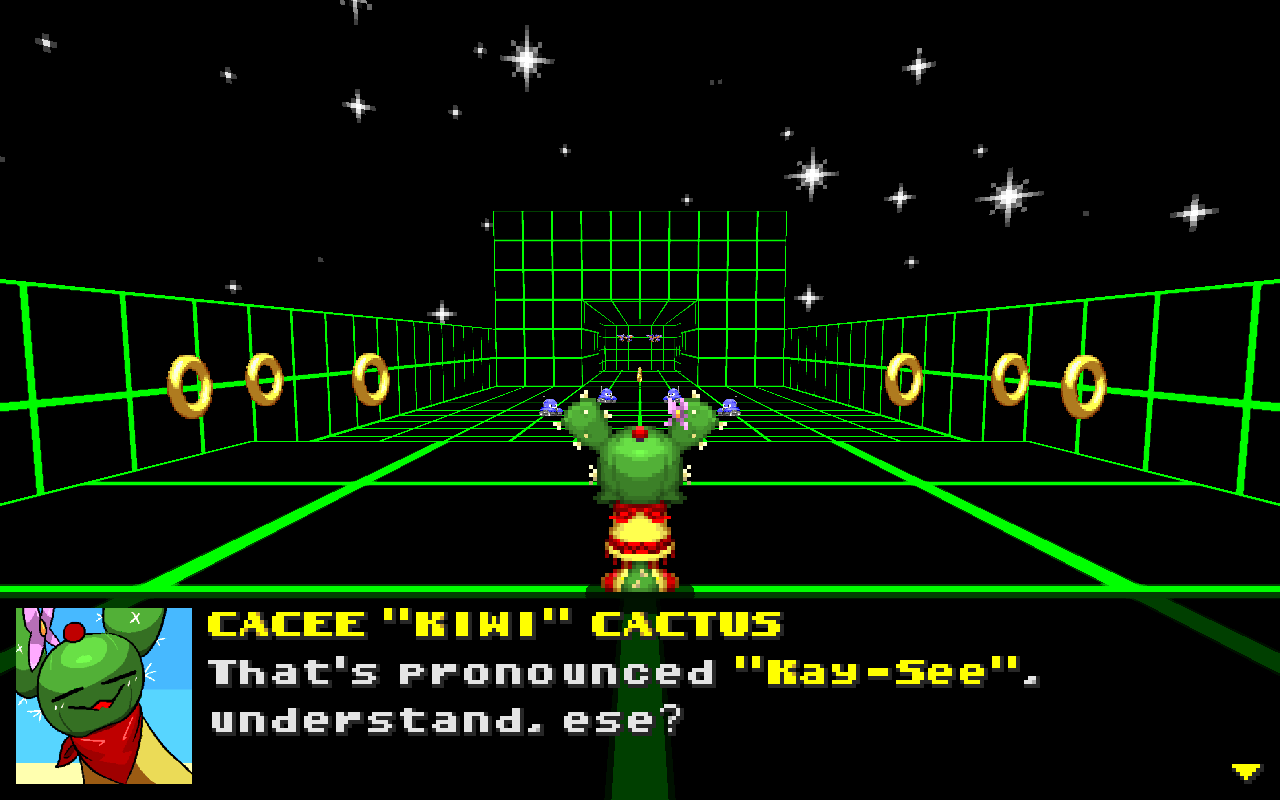 Not many characters are easy to pick up right away, I decided to include a tutorial map with my character, Cacee will walk you through some simple mechanics to help you learn how to play her properly, and at the end, if you so wish it, is a small challenge course designed for Cacee herself, you can access this map by loading the tutorial from the main menu. 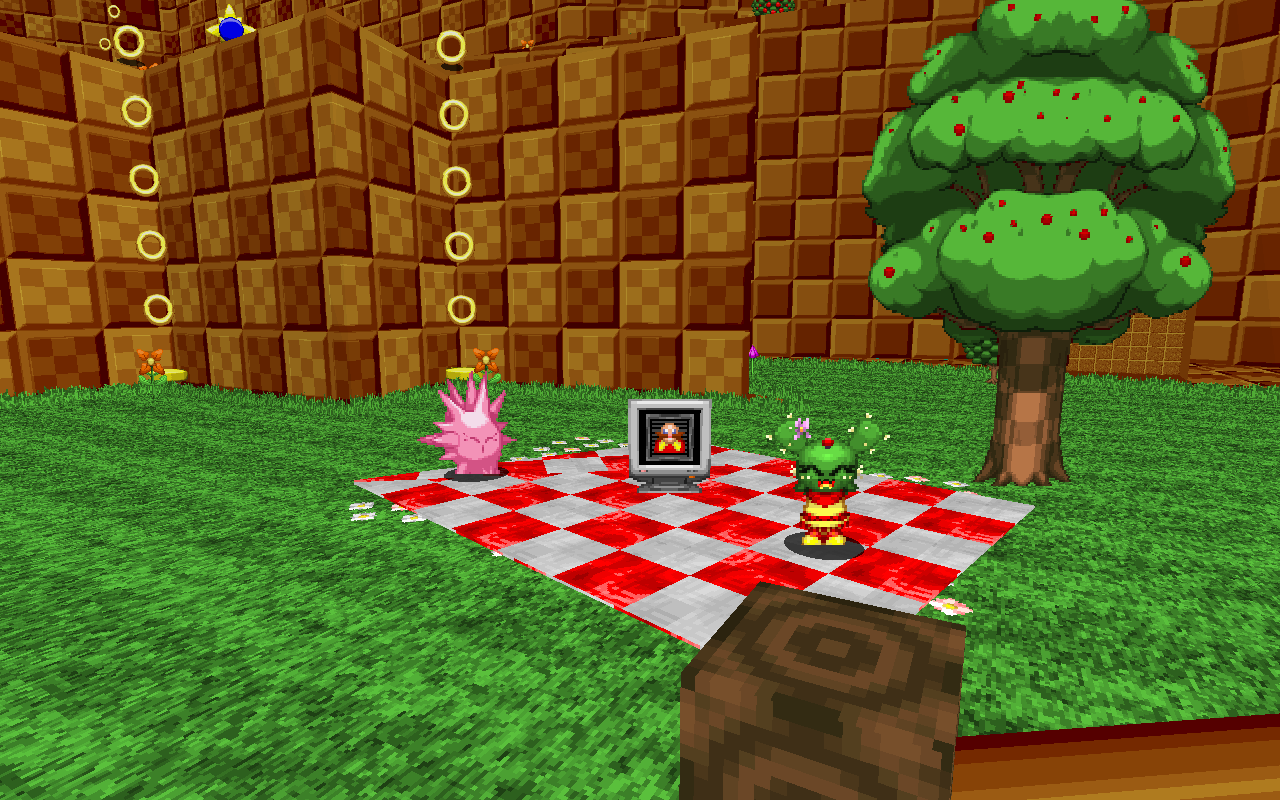 And... well, that's it, really, simplicity is the best for some characters, although that's not to say she doesn't have her fair share of secrets.

She does have compatability with some other mods though, such as
Xmomentum, Battlemod (lite support), Milne & Kirby, bet you can't guess what Kirby gets, hrm?

The new commands added in should help you with your runs of cacee, or for those using a controller


caceehoming - toggles on and off Cacee's homing with her punches, always off by default in battlemod modes
caceecamera - lets you toggle between aiming via camera or aiming via direction input


*Credits*
Spritework: Me! I really love my Cactus girl, I hope you like her too
Coding: SMS Alfredo, thank you very much for offering before I even asked, and for doing a superb job too
CSS Text: Starlight and Steph, I am very bad with my words, so thanks for helping me English
Beta testers, there was a lot of you, but thank you all for pointing out any bugs me or alfredo missed, you were a big help c;

Good moveset!
funny character
(looks like on cactus mccoy...?)
Kiwi Color
battlemod! (I'll not like this gametype and cacee looks like bad character for this maybe you can add cacee for super smash flash 2?)

But yeah, THIS IS my favourite custom character far due to how versatile and rewarding her playstyle is. in fact its so fun i, always use her if shes in a server.

Release v2 - Still feels really good but i noticed there is no way for me, to my knowledge, to pick and choose which super form i want to transform into if i have BOTH sets of emeralds.

Also shes tiny which has its benefits.

light dasher
If you press the Spin key as you transform, you'll cancel out of the Sol form and turn super instead.
Upvote 0
Goddamn. I wasn't expecting a literal cactus to pack a massive punch. I got used to her without the tutorial map, however. That, and her abilities are amazing to use. Any character that's gonna make you immune to spikes gets a seal of approval from me. I will say this though; she lacks useful abilities. If I were you, I would've added some sort of ground pound ability to access Amy/Fang paths, as well as a proper spindash to get through spin character paths. Currently the only paths she can take are either Knuckles-exclusive paths or paths without a spin gap. Other than that, this is a solid character mod, and the recently-added Super form is crazy to control.

light dasher
The third hit of her punch combo can actually break floors, it's actually said in the tutorial funnily enough.
Upvote 0
I LOVE SHE. Being a nospin character makes it more difficult and i love that. and her movement set is super original and enjoyable.
PD: she's super cute! :3
Upvote 0
The Fang fight alone makes this a perfect 10.
Upvote 0
Smol bean is like Jack Frost, she is the only thing that brings all corners of SRB2 together

As for the weapon
"What can I say except your welcome!"
Upvote 0
This such a cute looking character, and has super cool abilities that allow for a lot of various playstyles, great work!
Upvote 0
now this is a smash ultimate character
ngl this is pretty cool!
Upvote 0
funny punching cactus

Cacee is one of the more unique characters here on the message board, but she fits right in among all the others. At first glance, having her be a no-spin character is a bit boring, but her core mechanics and playstyle are the complete opposite. Punches feel very nice to string together, and can even let Cacee gain some insane height if she has enough enemies at her disposal. Her mobility is unfathomably good, and moving around with her is not only consistent, but very fun to boot. Some of the extra touches (immunity to some spiked hazards, being able to tank 1 hit of fire damage, etc.) make her even more of a treat to play. Some of the secrets/finer details also make the overall experience much more charming and unique.