Overview Reviews (1) Discussion
This thread contains content that may be reused, modified, or ported by anyone.

Pagoda park, back from the Autumn OLDC.

It was a rush job, being a last minute replacement for my initial plan.
So I figured I might as well properly finish it.
And learned a few tricks in the process. Improvements include:

A handful of new area's, rooms and alternative routes to try and help with the pacing of the level and give more purpose to the more empty area's.

Hooray, I finally figured out what went wrong with my sprite attempts, I had to center the graphics to avoid them spawning miles below the stage. So improved scenery, but also custom enemies this time. Such as the armored Eggpawn

And the thing people requested the most.
My custom graphics stand out as a sore thumb among the original SRB2 assets, so here's some brand new playable characters that look like a sore thumb themselves for a cohesive experience.
Not recommended playing them in the normal compaign, they don't look very well there. They're entirely made as aesthetics for my own levels, I guess.
Don't expect any fancing gameplay mechanics.
Hence why I'm not submitting them for the general character forum.
So, without further ado;

The most conventional choice, Charmy Bee, everyone's favorite Detective. Mostly done as a favor to one of my voice actresses, and because he's one of the few official characters without an SRB2 appearence...Far as I know.

Hhog. My first test. From my own webcartoon series from back when Sonic recolors were still cool.

Chair Sonic, for when you want to save the world but don't want to leave your comfy chair.
I did initially say I wouldn't do ANOTHER version of Sonic, but when I got a request to make a Chair Sonic based on a running gag from my Sonic OVA parody
https://www.youtube.com/watch?v=ETLEcwmwcA4
I figured it'd make for a fun character.
Aw, reminds me of being a 13 year old and finding a ToiletMario mod for Mario 1.

Update, Micro took the trouble mirroring the character, so ChairSonic faces "the right way" in version 1.2.
Altough I personally still prefer him facing the other way, but now you can pick which version you prefer. Him moving the chair with his mind, or like a vehicle.

Moderator
Judge
Welcome to releases! Although it feels pretty odd having characters here and not even mentioning them in the title. Also, it seems Chair Sonic has his sideways view sprites on the wrong angles and they need to be flipped around? I also think the enemy hitboxes are awfully wide, as seen by their shadows, you may wanna narrow them some. Still, I love that you actually put in the work to draw badniks and characters in your style just to fit!

What can I say. I have already evaluated this level at OLDC and I have nothing to say. The level is still very narrow. And I don't like your style, but it's not your fault.

You've added enemies that are very large and fast enough... Combined with narrow space, this is disappointing.

Why haven't you removed the vanilla level header? 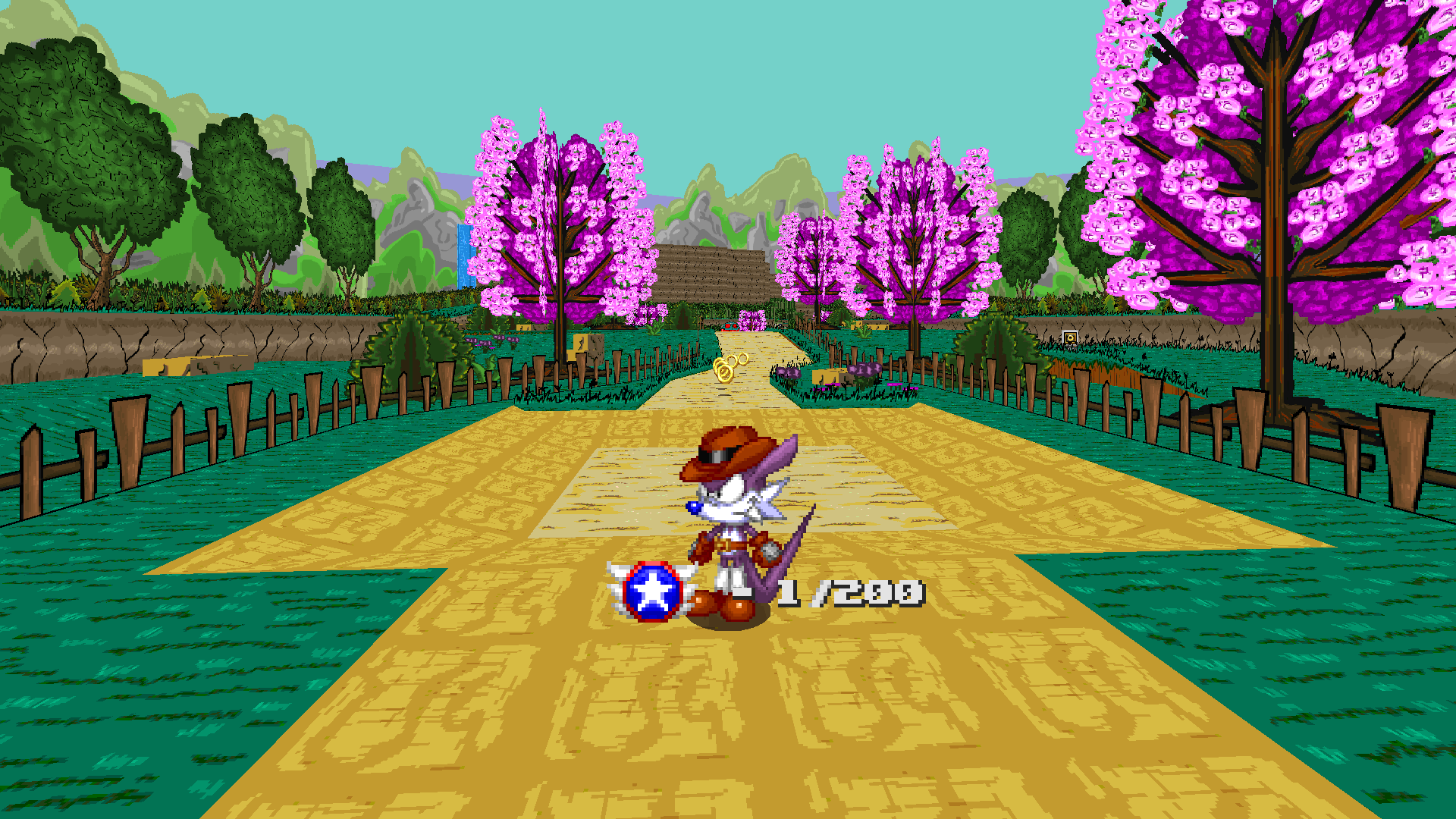 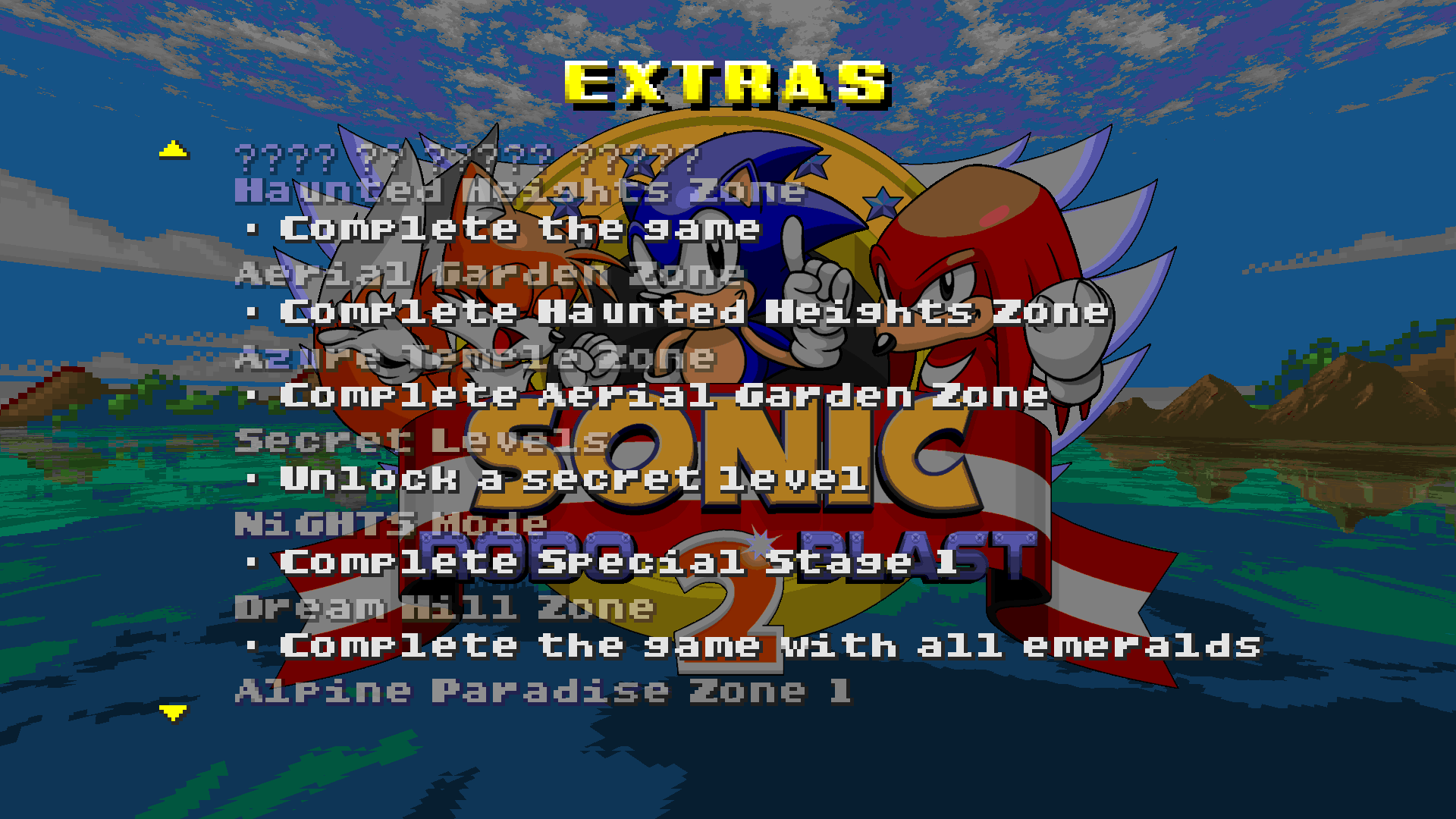 This emblem is not inscribed in the level heading 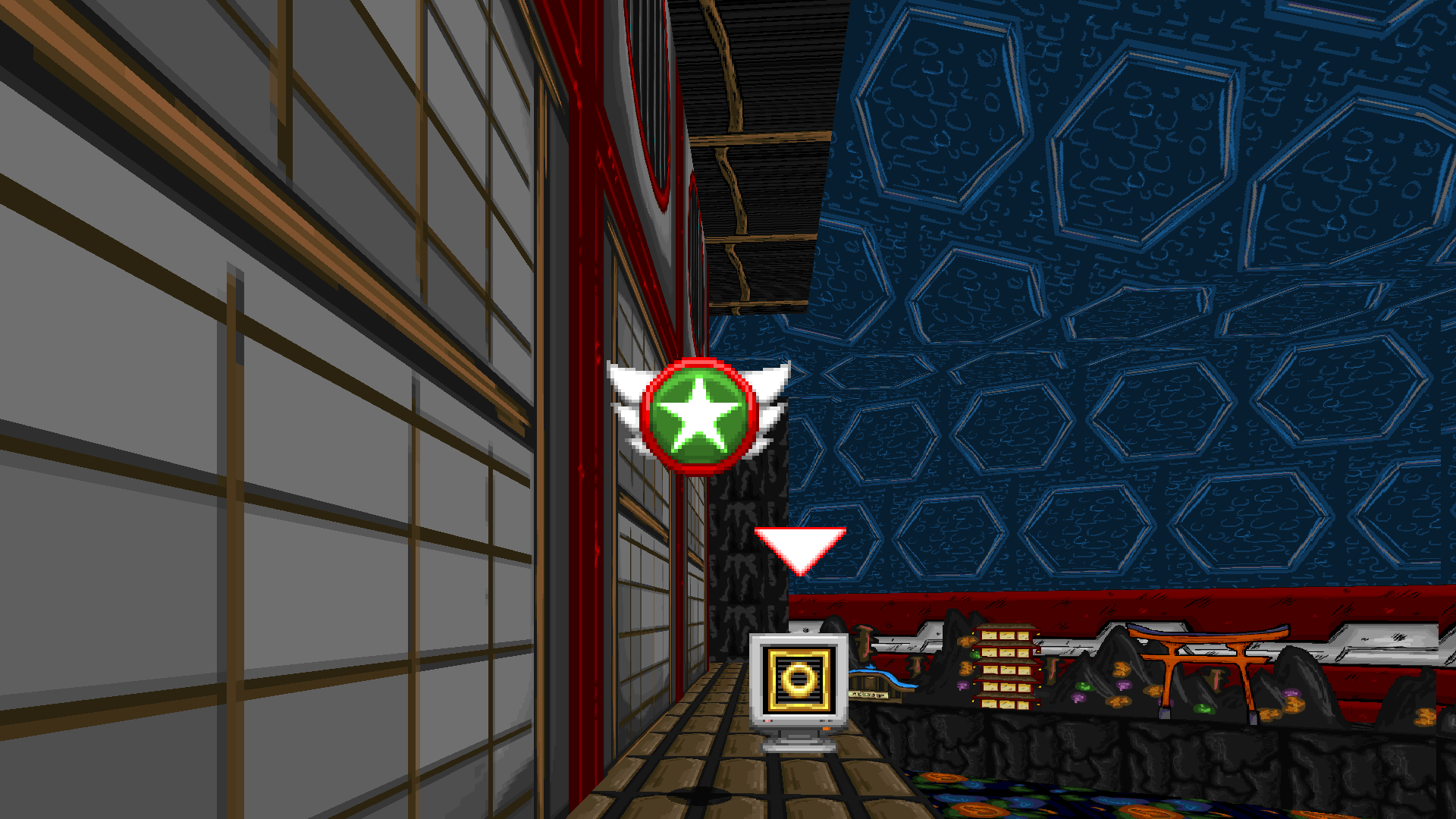 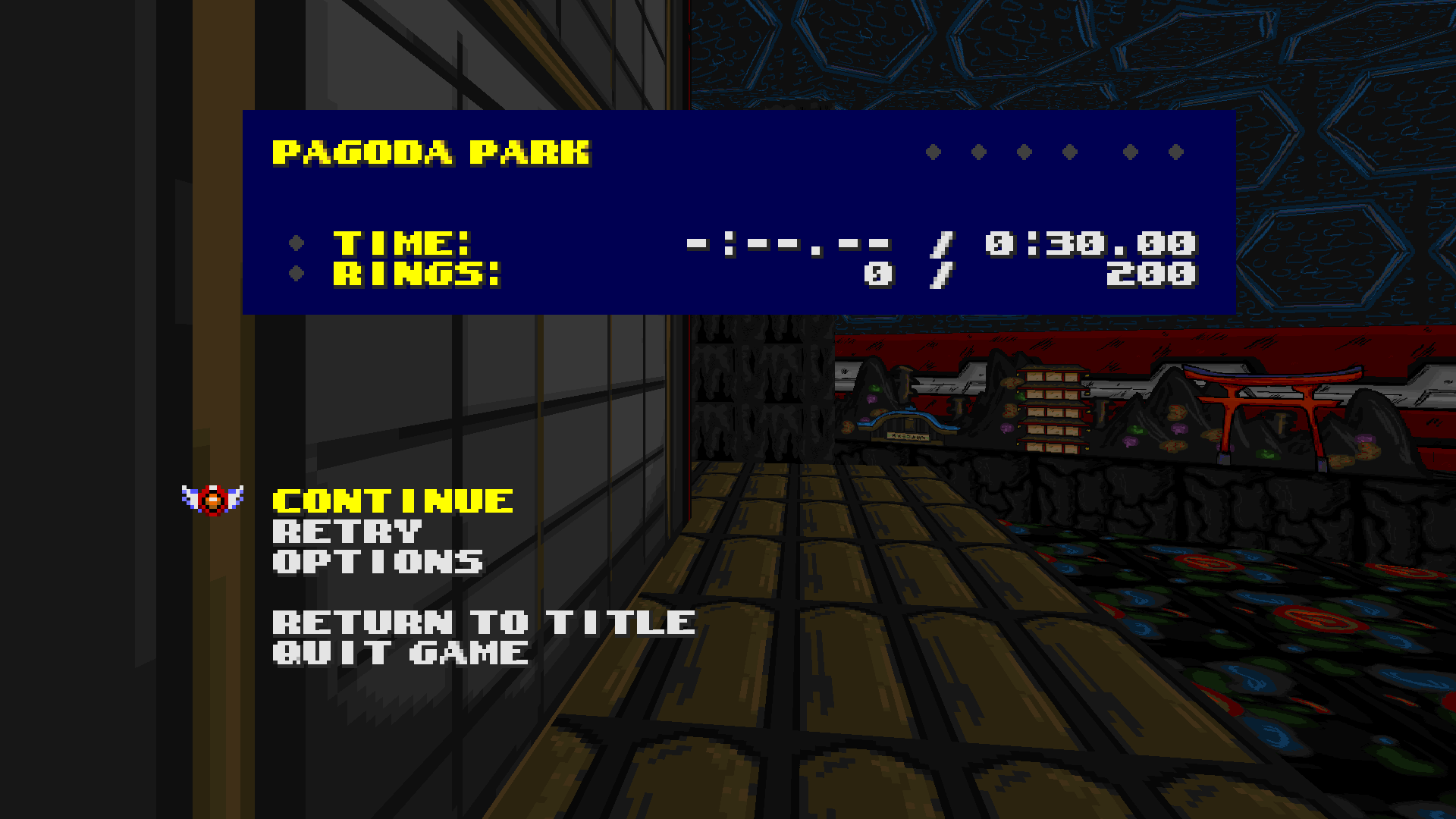 Chair Sonic being in mirror is so that it looks that Sonic's the driving force and the chair's trailing behind him.
As if he's moving the chair trough sheer willpower, which I thought is funnier then if the chair behaves like a conventional vehicle.


Uhh, don't have an excuse for the other problems. Update time. Enemies are toned down, emblem fixed, removed an unnecesairy L in the files, Charmy's wait animation is fixed.
I don't know why Metal Sonic is missing. He got the same instructions as the other characters. Pfft, rebel.
Last edited: Jan 31, 2021

You have a lot of errors in the console! 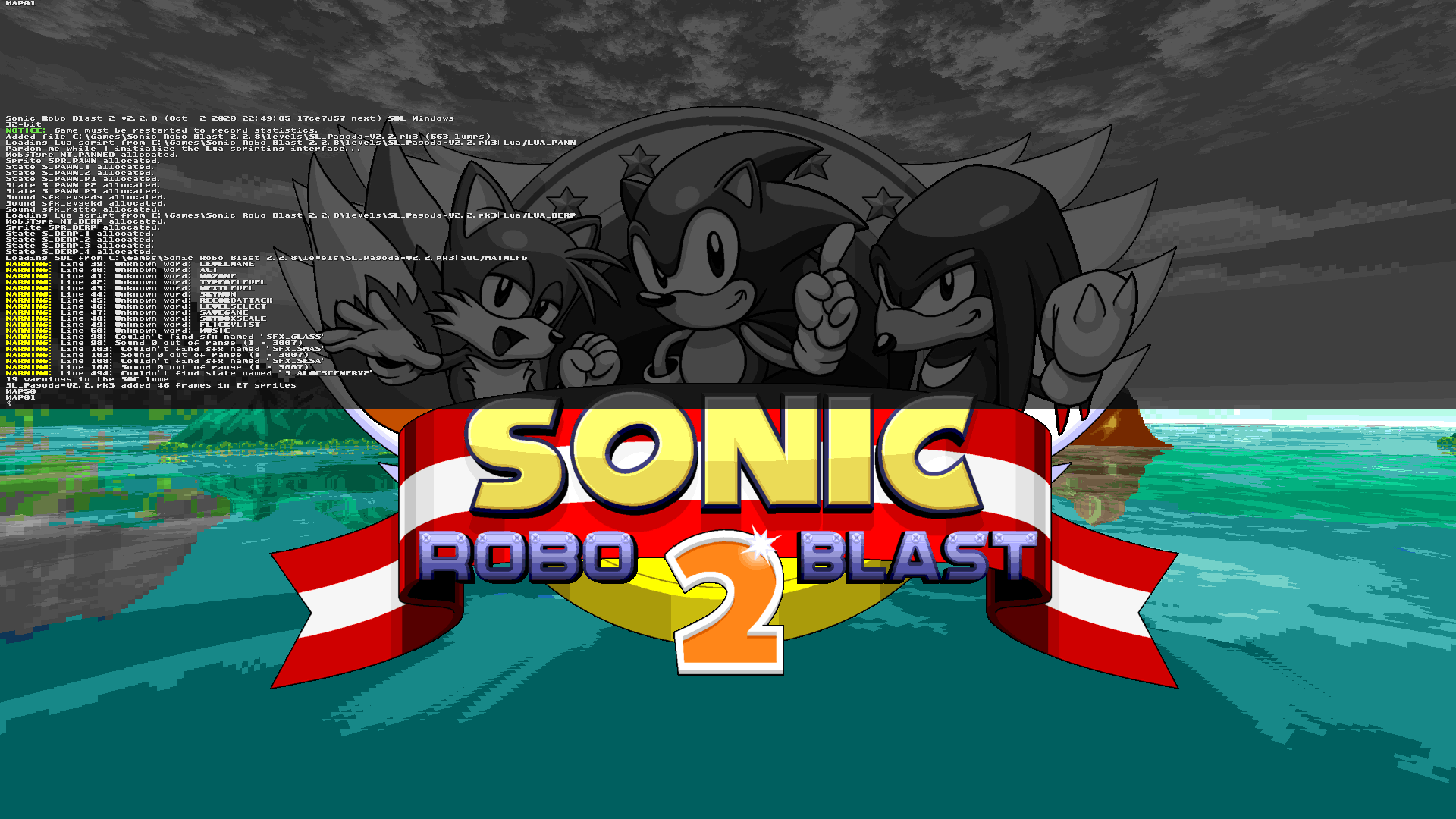 So many errors and only one made sense.
Fixed the Algue 2 scenery thing.

All the other errors have to do with the fact I modified a bonus level, I think.
Guess the level header was wrong, even tough I followed Wiki instructions far as I understand. And it works correctly.
The other lines it complains about are needed for music and soundeffects for the other level, so I ain't taking these out.

so how do you unlock the door?

To unlock the bonus level;

At the start of the level, when you reach the water, go to the left (With a vertical character like Tails, Knuckles or Fang) and follow that route.
Before you reach the open area with the Onsen and town, there's a little shrine you pass on the left. Activate the button there. The door before the waterslide at the end is now open.

So, I thought about it a bit, and I understand where you're coming from, not wanting to release yet another Sonic into the sea of Sonic character add-ons. But like...I thought the point was that the vanilla characters "stand out like a sore thumb." These characters are drawn in your style, so now everything we see (aside from the UI, and that's not a request, lol) is drawn by you. They're made to compliment your levels. So even if you made another Sonic, people are probably only going to use them while playing your levels. Unless someone is really desperate for a Charmy Bee add-on, or something.

Of course, do what you want to do. I didn't even expect you to do any characters in the first place. But if you're limiting your possibilities because you think someone is going to be like, "Ugh! Another Sonic? There are too many Sonics!" Well...don't. lol

Uh, the "Shut up" comment from Aurux is a meme/ running gag based on OVA Sonic, before someone gets the wrong idea here.

Well, a more conventional Knuckles is planned for when Sol Sestancia 2 is done.
And Whisper, who should be more popular then Charmy at least.... I think?
I was just toying around now anyway. We'll see who else I'll draw. Altough if I make Sonic - Tails- Knuckles, then the request for Amy, Fang and Metal will follow shortly, I'm sure.
Seems I'm going to be busy then. ^^;

Rogerregorroger said:
Uh, the "Shut up" comment from Aurux is a meme/ running gag based on OVA Sonic, before someone gets the wrong idea here.

Well, a more conventional Knuckles is planned for when Sol Sestancia 2 is done.
And Whisper, who should be more popular then Charmy at least.... I think?
I was just toying around now anyway. We'll see who else I'll draw. Altough if I make Sonic - Tails- Knuckles, then the request for Amy, Fang and Metal will follow shortly, I'm sure.
Seems I'm going to be busy then. ^^;
Click to expand...

Good to see you've finally managed to master sprites! Though it has its downsides... those floating heads are seriously freaky, haha.

Oh man, a playable Charmy. Let's mix it with the Pets mod and have some fun... 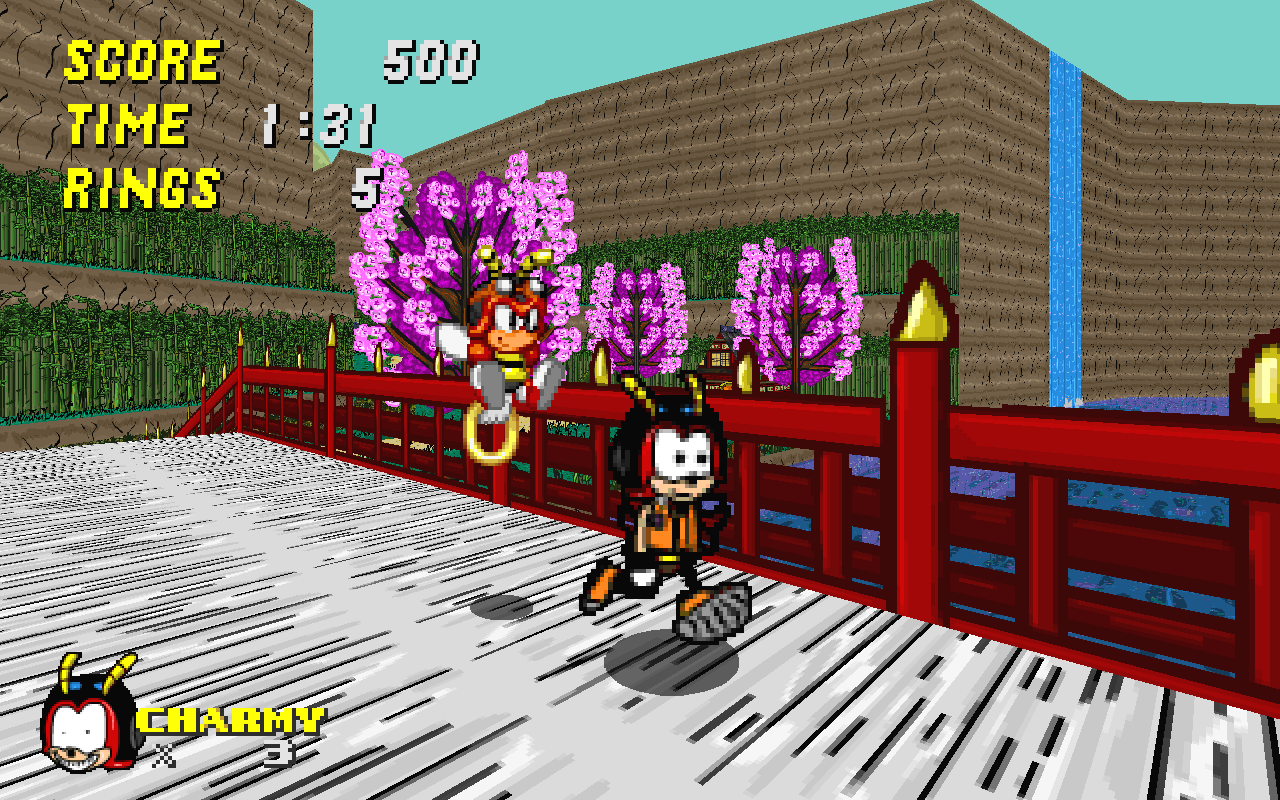 Not related to the level per-se, but I just want to say that the Sonic OVA animation fucking killed me, man.

you are on yt me too

Heh, that's the problem of me designing Badniks, i either go for generic soldier robots or with some kind of twisted dark sense of humor.
But yeah, I'll keep the creepy enemies to a minimum in the next pack.
Kinda a bad idea to make enemies into a joke since it isn't funny after you see them over and over again.

Glad you liked the cartoon.

Master the hedgehog said:
you are on yt me too
Click to expand...

CRIINGE... Plus, it doesn't even have anything to do with the mod!
You must log in or register to reply here.