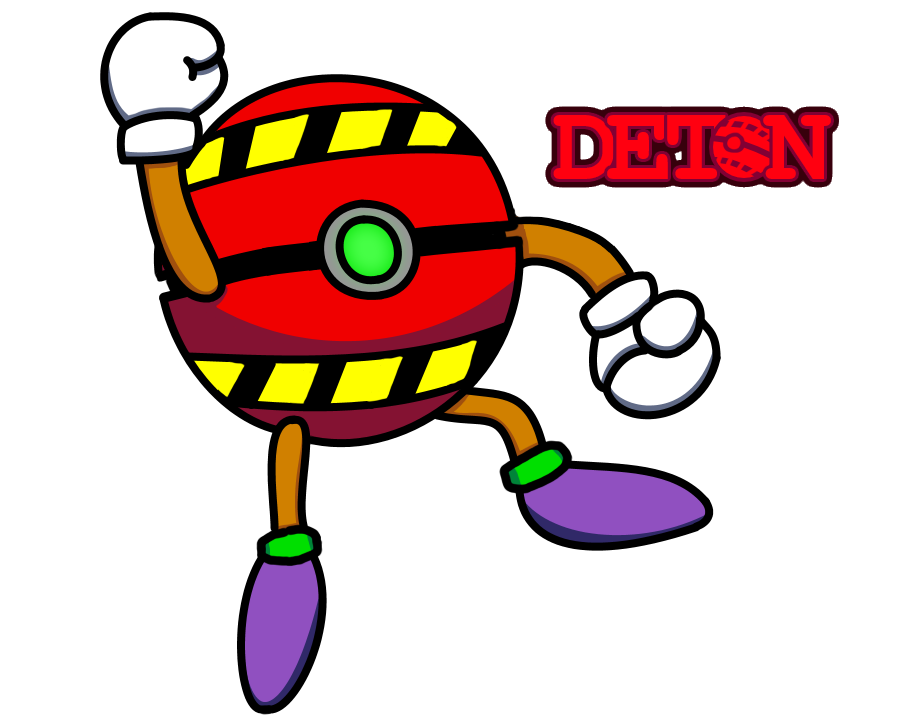 Deton, a sentient badnik, is ready to groove his way down his own victory lane!

Like all Detons, you can hover around, similar to Metal Sonic. However..

Detons are actually rideable! When hovering, another player can grab on and go for a ride!

Don't forget the explosion part! Jump and press the spin key in the air to launch yourself up, while destroying things around you!
(Fair warning, if you plan on using Deton in any mode where you can hurt other players (take battlemod for instance), you'll be able to hurt others with the explosion.)

(Hey, don't forget you can still spindash! Deton IS round after all..)

KIRBY
Inhaling Deton will grant you the Bomb ability.

DIRK
Deton has both surfing and frozen sprites when with or against Dirk.

BATTLEMOD
Deton's ability is slightly tweaked from Metal sonic, but is overall the same.

GRIND?
You'll figure it out in the future.

SRB2P
Kinda did this for shits and giggles, it's just a Metal Sonic clone with tweaked stats and some other stuff sprinkled around.

Have fun, and have a great day.​


v1.1.2:
- why did nobody tell me the time attack sprite was screwed up dlkghfkdjhgklxufg

v1.2.2:
- Srb2P support
- Cleaned up some code
- Milne support
- more xmom junk
Motdspork: Would you believe me if this uses part of the SLW bounce lua?
SMS Alfredo: Explosion part (sparks and attack range)
XtremeXavier: Coming up with the idea of Dancing Deton in the first place

amazing
deton.wad is back but not in the way you expected

Finally, a quality mod in a sea of current odd things

quick update
v1.2.1
- why did nobody tell me the time attack sprite was screwed up dlkghfkdjhgklxufg
Last edited: Jan 25, 2021

are we having dance parties now??


ok
You must log in or register to reply here.