The pack now includes separate PK3s! Simply download the pack and there will be a folder containing each character separately.

NOTE: Aerith has exactly *one* swear as one of her hurt quotes. Please keep that in mind when downloading!

Aerith, the 25th racer, has been added.

A new kart template, the Pipe Frame from Mario Kart 64, is included in the pack.

Moderator
Judge
I was a bit wary about adding this due to the odd joke characters (goombakart I've seen on Discord so I assume that's some kind of injoke I just don't know about), but the quality of the other characters made up for it. Welcome to releases!

Updated the pack- there were a few things here and there that were bothering me that I've now fixed, on top of adding a version of the pack that works without two-color/LUA for those who want that. I've detailed all the changes in the OP + updated the download link!

I've updated the pack to version 3- both the KC and KCL packs contain folders with each character as a separate PK3 for ease of use! I've also added two new characters- Mario and Metal Mario!

mitsame said:
I've updated the pack to version 3- both the KC and KCL packs contain folders with each character as a separate PK3 for ease of use! I've also added two new characters- Mario and Metal Mario!

Moderator Notice:
It's not against the rules, but why do you feel the need to quote the post directly above you, even the huge images included?
Click to expand...

Moderator
Judge
Why are you being as an ass about it? Let the author do what they want. It's not harming anybody, and people are free to do their own versions already existing characters, like the different Sonics. It's just this author's version of Mario, and even an edit that makes him Metal Mario because "why not".

NoNameGuy721 said:
is there a explanation on making this character pack? (calm down or dont make a infraction on me im just saying that we already have a mario i SRB2 Kart ok?)
Click to expand...

Because I like Mario! The next character won't be another Mario.

Technically, this Mario is meant to fit alongside Virt's fantastic Daisy- both are based on their Mario Kart 8 incarnations.

On another note, I've fixed up some incompatibility issues regarding this Mario and DirkTH's. You should be able to use the KCL versions of both this pack and Dirk's Mario without a hitch. Mario's file has also been renamed to "Kart8Mario" so it's easier to tell the two apart.

mitsame said:
Because I like Mario! The next character won't be another Mario.

Technically, this Mario is meant to fit alongside Virt's fantastic Daisy- both are based on their Mario Kart 8 incarnations.

On another note, I've fixed up some incompatibility issues regarding this Mario and DirkTH's. You should be able to use the KCL versions of both this pack and Dirk's Mario without a hitch. Mario's file has also been renamed to "Kart8Mario" so it's easier to tell the two apart.
Click to expand...

well... mistery solved of "why is there another mario wad in SRB2 Kart"

wanted to say that these are probably my favorite characters to use in srb2k! thanks for making these and i hope to see more!

I've updated the pack, and have added Pit! He's sporting a design inspired by both the original game and Uprising.

Furthermore, I've removed the option for a LUA download. It's simply too much for me to juggle at once, and LUA scripted characters aren't compatible with single player anyway. I have ideas for how to give certain previously LUA-built characters two-tone palettes, but they would require new palettes to be added to the base game. I've got a bunch of patch notes in the OP as usual!

Luigi is here! Now you can race as both Mario brothers. More details in the OP!

We are now at 10 characters!! Wow!! Next update I may start to split this pack up, though I'm not entirely sure how I'd want to go about doing so. I think it ultimately depends on who I complete next.

I wouldn't mind 2 packs: Serious and Joke.
That way you can make all the joke characters you want and others won't feel like the 8-bit Link and Goombah are sort of deadweight.

Dimpsy has a good point, plus it'd reduce clutter on servers that host the pack mainly only for the more seriously-designed characters.

I'm not sure what exactly in my pack constitutes as a "serious" character, though, besides 8-Bit Link and Goombakart, which are obviously joke characters.

8-Bit Link I was planning on giving an overhaul so he's closer to a voxel character visually with all 8 directions which blurs the line even more, and I think even still there's only 2 joke characters out of a total of 10 if the only thing that defines which ones are jokes are the amount of effort put in. There's a lot of Marios but the only one closest to a joke is Super Show Mario, who isn't really a joke, just a funny character. Every Mario regardless has an equal amount of effort put in, but if I were to split off the Marios into their own pack, I feel as though the problem would persist because it would take up another add-on slot and people would just use it for one Mario.

The simplest answer I think would be to cut the joke characters, however I know they have their uses and I'm pretty confident in the mindset that not everyone sees them as "deadweight", especially 8-Bit Link. Furthermore I don't really know if I have any other joke character ideas that I couldn't also just turn into "funny characters that have effort put into them", or ones that I wouldn't add to the pack on principle alone.

Version 6 is here along with Mob and Reigen from Mob Psycho 100! We're now at 12 whole characters! Hooray!

Version 7 is finally here with the 13th racer- Alex from Street Fighter 3! The sleeping lion has a weight of 9 and a speed of 7. Download the new pack here! 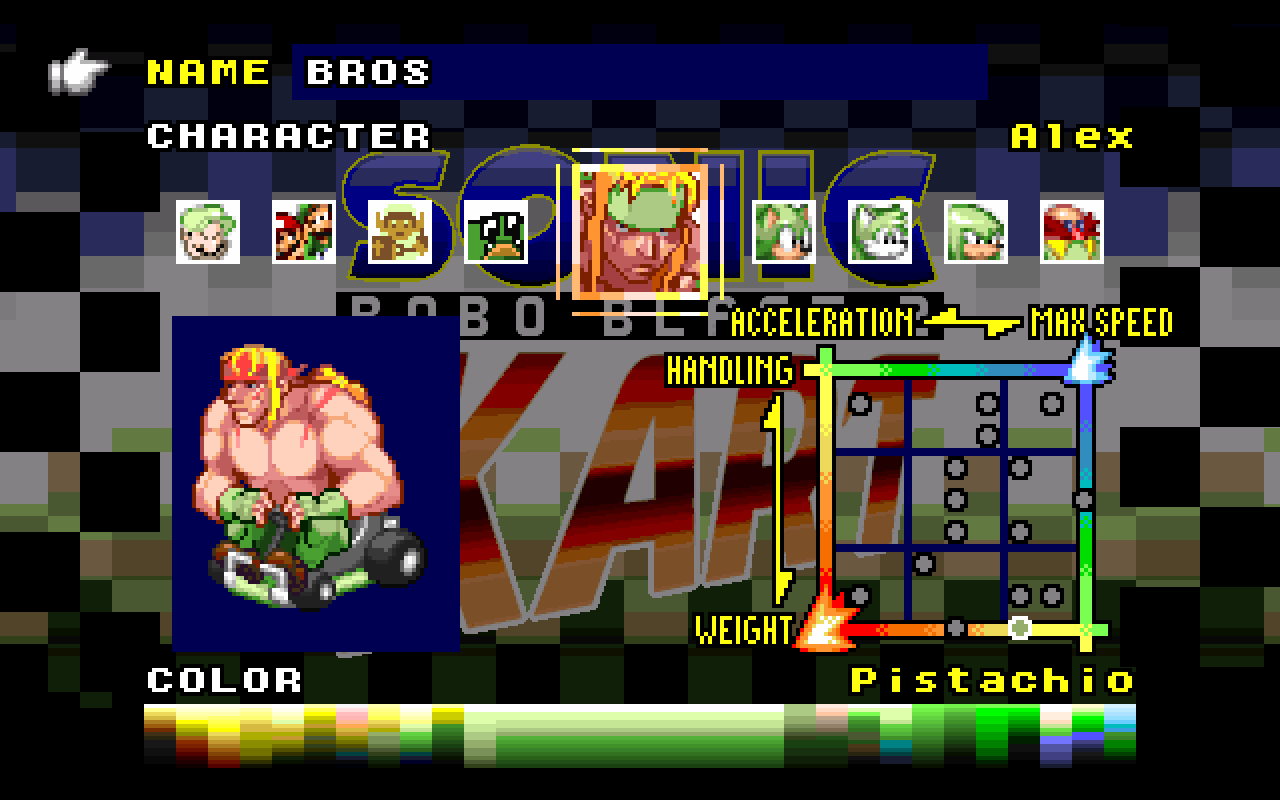 Makes me wish I had people to play Third Strike with again... Alex is great!

Download the pack at the Google Drive link! https://drive.google.com/file/d/1iTiw7IweE90lDFtG6qGo2gtWByikJ2iC/view

Finally, more Scott Pilgrim representation. :picardy:
You must log in or register to reply here.