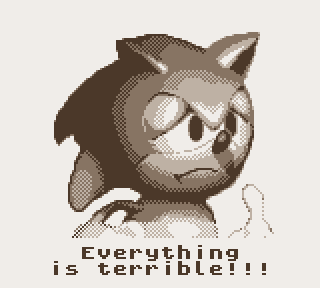 Is SRB2 Kart just not awful enough of an experience? Is it just too rare to go to a darn map from the depths of Map Hell? Well, since it's my birthday, I will give YOU the gift! The gift of torture! Everything is Terrible!!! This mod gives you all the Hell Maps by adding them to the normal level select and voting screen! Not only that, but it also adds back the maps cut from Map Hell! But that's not all, it even adds a new hellish map, the so-called "Lovely Afternoon", now with a minimap and horrendous encore palette this time! Now please, I dare you to enjoy this hellish collection! Oh, and a previous version of this had silly map voting music changes, but I made them separate from the main pk3 instead, if you still want it.

VERSION 1.2 - Lovely Afternoon has better waypoints, thanks to Gunla!

...Actually, since we're on the subject, how about a little trivia?


What banishes a map to Map Hell?

Quite a few factors can decide why a map would go into Map Hell. High difficulty, poor polish, an old "classic", being unfinished... But that doesn't mean the maps aren't still fun, at least in moderation. Hence why they only come up by rare random chance in the base game. Of course, feel free to run this mod if you want them in your normal voting chances, but I don't expect servers to run this often anyways. But hey, let's break down some of those reasons a bit more.

Originally, Map Hell was only one map; Crystal Abyss. Perhaps the most difficult of the 'high polish' maps in 'Kart, it is one of the longest non-sprint courses to boot. It was only meant to come up occasionally, hence its Hell Map distinction. Though, the Kart Krew obviously expanded the Map Hell section with other difficult maps and more qualifications...

For whatever reason, some maps just don't get the extra spit 'n shine others do. Maybe lack of interest, the age of the map, canned idea, or whatever the case may be. In the case of some maps, there... may not be much to do that can help.

Peach's Castle holds a lot of nostalgic appeal (at least to me), so its barely changed from its original incarnation. The castle interior and exterior was a sight to behold back then! The "Classic" moniker has been expanded to include old versions of some maps too. Compare and contrast! Volcanic Valley Classic is quite the radical upgrade, huh?

It's as simple as it gets my dudes. Frozen Night was already pretty flat, and Meadow Match didn't need much changing, but these were pretty easy ideas, I imagine.

While I can't speak for the other maps (Arid Sands perhaps?), there is at least one map on here purely because it is unfinished; 3 Color Drive. This one is really personal, as I made this one before I was on the dev team, but long after I last made maps for the older versions of SRB2 Kart. I was in a really depressed funk, and I just had nothing going on... But when I saw the SRB2 Kart trailer and saw that the Kart Krew was indeed working on the game after all this time (aside from the Top Down detour), I felt inspired to get to work! But I didn't have any playable build of the game, so the best I could do was draw the layout and send it to VelocitOni. I remember asking Chromatian a lot of questions too. I did as much as I could with no references or real guides, just what I've been told in Discord. As a result, it was added to the game during the last days before release! But this also means its unfinished, as it is way too easy, and still lacking... something. Perhaps you'll find out just what I plan to fill this map with... in the future. It may crawl out of Map Hell someday!