Download
Overview History Discussion
This thread contains content that may be reused, modified, or ported by anyone.

Here's another custom character i made.

He plays like a normal Tails but he can turn super! 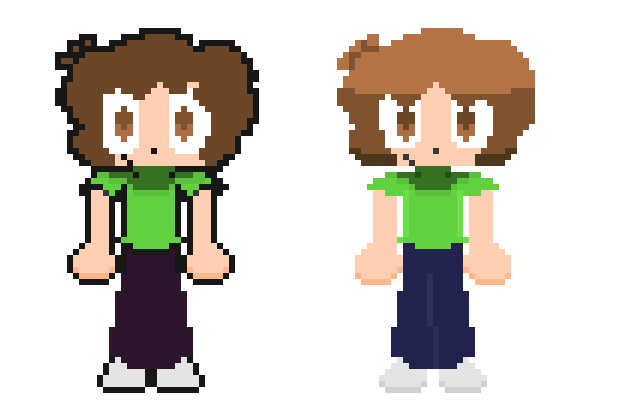 Sprites of him also were made on Paint!

Thank you for moving my character to releases :)

This applies to both Rafael and Pedro, but you should really try to give your characters more unique playstyles, if your characters are *just* sonic but he looks different, and *just* tails but he looks different, nobody's gonna have any reason to come back to play them over the characters that their movesets are copied directly from. You can do some pretty neat shit with the base game's abilities without any lua, so i'd reccomend toying around with the different flags, and what mindash/maxdash does to things like amy's hammer, or what giving multiability to CA_DOUBLEJUMP does. though, you would be better off trying to get actual lua'd abilities.

You should learn a bit about coding and lua

Okay so here's some constructive criticism on Pedro/Rafael, you really need to try not to trace on top of their animations so you can try to improve making characters more. The lack of thereof shading, AA or anything is kind of lame and having their playstyle literally just be Sonic or Tails just makes them not memorable and people won't come back to playing it again since they already have that option to play off the original characters. You should try toying with Lua or just overall different flags and options on the S_SKIN lump to make a fun character with an unique playstyle. I look forward to your next projects soon!

Soo, i see that some People are saying me that i need to play with the S_SKIN or at least get an lua script soo that both my characters can be memorable. I'll give it a try and then ill launch the v2 of them

I hope there should be a Knuckles-like character named "Alejandro"

when i paired rafeal with him i got double rafeal

Strange, should fix that in a later update but a screenshot can be helpfull to recognise the error or just a more detailed explanation (i didn't expect a comment on this post since i was going to do his remake )

The problem should be fixed now. See if you can try it.

golden statue who's best friend is a human

nice character
but not original enough

I know... - _- But thats how he is in real life. I don't know what i could do to make curly hair look original but yeah, i will not think of that much since he's getting a remake :/

golden statue who's best friend is a human

i think you could make his flight different to use

and change the flight sound

Yeah, don't play this unless you want too :/

heads up jake its sonic boo

MADVAL2 said:
I hope there should be a Knuckles-like character named "Alejandro"
Click to expand...

I'm just gonna take a guess and say Pedro is Rafael's real life friend, so I don't think Alejandro would happen unless he makes a friend named Alejandro. Just saying.

Alright time for my opinons.
This is just a Tails clone, so it really just comes down to looks. It looks great for something made in Microsoft Paint! I'm curious as to what you'll do with Pedro's lua! Good job!

Alright time for my opinons.
This is just a Tails clone, so it really just comes down to looks. It looks great for something made in Microsoft Paint! I'm curious as to what you'll do with Pedro's lua! Good job!
Click to expand...

That was a close guess, i hate correcting people but Pedro is actually Rafael's brother and his sidekick too. I can tell that Pedro will have a new ability tho his flight will remain the same cause the real life Pedro wanted to casluse if it was changed then the Duo wouldn't have any ability to perform together :/
You must log in or register to reply here.