Fame is temporary, but your passions are eternal.

A New Face has joined the Adventure... 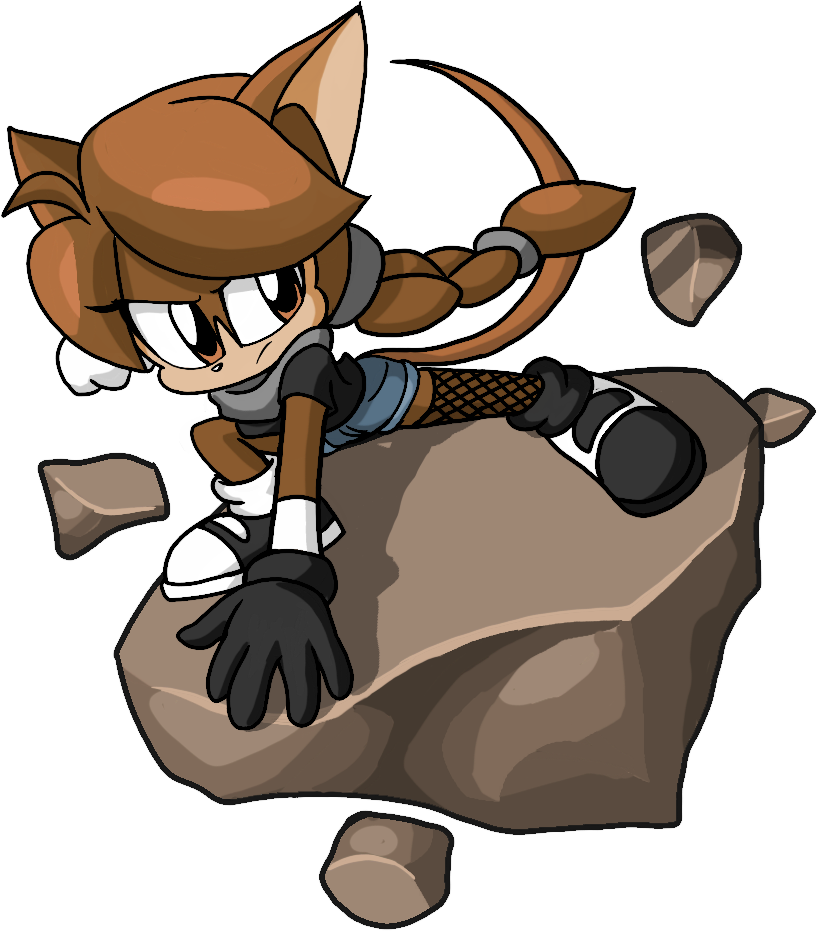 Gemma is a young tarsier-cat hybrid and an aspiring adventurer born with geokinesis, a kind of power the lets the user control and manipulate earth at their own will.

She was living a rather mundane life... until she witnessed Dr. Eggman's vandalization of Greenflower mountain next to her and Mom's house, and heard news about his plans of conquest of the mysterious Black Rock, which recently returned to the planet's orbit. Noticing the famous Sonic the Hedgehog and his gang hopping into action, She eventually follows them to see for herself what is going on.

Tera-riser:
Double jump to drop downwards with enough force to break the floor beneath your feet and ride it upwards. You can jump or spindash off this newly created platform at anytime.

Tip: Hitting an enemy or hazard with the rock platform will allow you to perform the move again. Chain multiple together to gain maximum height!

Gemma is also Co-op friendly. You can use this ability to take your friends to a lift.

Otherwise, she pretty much plays like your traditional Sonic character, Classic Spin Jump, Spindash and all.

You can configure how Gemma's ability controls using the "gemmastyle" command. I/O support is included.

Hold (gemmastyle 1): Let go of jump while riding the platform to hop off of it.

Triple Jump (gemmastyle 2): Press jump while riding the platform to hop off it.
Fun Fact: Style 2 (Triple Jump) was the initial intent of how it was supposed to work.

v1.2
- Removed "Mixed" (gemmastyle 0) playstyle.
- Gemma no longer performs the Tera-Riser if you land with the drill without holding jump. The small shockwave of rocks that you emit after landing with the drill now destroys enemies.
- You can now Spin-Dash while riding the rock platform.

v1.1
- Most Sprites had been touched up.

v1
- initial release
As my first vanilla SRB2 character mod, it was certainly a far cry from making a HUD mod and a Kart character mod. But of course, i couldn't have done this on my own.

If not for these awesome (and funni) people in the SRB2 Community, this would've not been possible.


I hope you enjoy playing as Gemma!

It's the baby!
Her ability is so much fun, and I love chucking the platform at things. ;P

It's great to see this finnaly released, you did a nice job with this character! I might try this later :)

I admire you Ralph!

I've been waiting for this character for a month, and yes, I look at Ralph's tweets friends, and I've also watched the character's previews, honestly my favorite :D

Damn!
I was really waiting to play with her a long time ago, and now she is here...

I will say good job man, i really love the idea of a Earth Character, something that wasn't maded, until now, Wonderful character Raph!

This looks really fun to play as. She fits right in with the other ocs like milne and skip. Good job making this, might try it later.

This character is really fun! also, the design is so cute.

Come on, you big drip! Where ya goin'?

Saw the progress on the SRB2 discord, and now playing as this character, I absolutely love her and her moveset.

I love her moveset

this character is extremely fun to use, i adore it

Man, I can't believe how much fun I had playing with her.

She is a very cool character, I had so much fun "flying" around through the levels!
It's just sad that she can't hurt others players in Match or Tag, but I hope that you can add that.

So... yeah, i was playing with her and, i found this error, that... happens when you Stomp a Box

Saw it on Discord like the others, the moveset should be fun

YES!
We have another Elemental-Based Character, and, like the others, is so much fun to play with!
We have:
Inazuma - Electrokinesis
Dirk - Cryokinesis
Whirl - Aerokinesis
Flare - Pyrokinesis
And now... Gemma - Geokinesis

The movesets are incredibly fun, you can skip some path in some of the levels, the sprites also looks cute, so...yeah, thats all. I love it

Moderator
Judge
This character is so good. So fucking good. The ability, while seeming simple at first, becomes absurdly powerful and fun once you learn how to properly utilize it, and the character herself is adorable. For a first project, this is legendary. Nice job, Ralph!

A fan of this cool game since the PSP days.

It's her! Man, I'm gonna downlead this right now!
You must log in or register to reply here.