Overview Reviews (3) Discussion
This thread contains content that may be reused, modified, or ported by anyone. 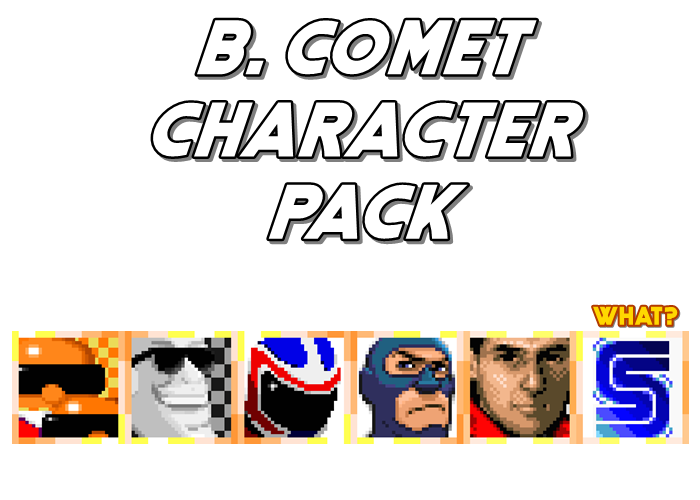 "After 9 years in development, hopefully, it was worth the wait" (because I am still slow)... Here it is, my own character pack! Which currently has 6 racers, which are:


I did my best for all those characters to look the best I could, I hope you enjoy playing with them as much as I liked working on the pack.

A quality of life update, because I love doing those.
​
Spy
- All of the Spy sprites have been adjusted to look a bit taller and less hunchback.
- Updated the front drift sprite and turning one.
- The small player icon was changed to a new one (you can see it on the Bros gif), and the signpost/big icon were updated to look better with a new shading and less banding.

Bonanza Bros
- Their heads had a size inconsistency between the turning/and drifting sprites, making it look weird in motion, all of them were fixed.
- The shading around their bodies was removed, and on the heads updated to always stay on the top.
- Fixed Mobo (smol bro) having a missing head on the front sprite.
- All of the sprites had some unnecessary banding removed.

That is it for today! Just be careful and download the new version instead!
Last edited: Jan 12, 2021

Yes, a F1 Car. And it's really big and out of place!​
With sprites coming straight from the Mega Drive's Super Monaco GP, the SG 1000 V8 is the newest addition to the pack. Meant to be kinda of a joke character and sort of a homage to the original game, with all the sounds coming from there.
The only thing I did was to rip the sprites and edit them to fit a little bit better in the game.
The car or the driver themselves don't have a fixed name, being referred as "You" in Super Monaco GP's World Tournament mode. However, the engine of the car is called "SG1000 V8", a reference to SEGA's first home console, so I thought that was a fitting name for the mod itself.

i am ze spy

One hell of a quality of life update.​
Featuring a complete rework of the Bonanza Bros and improvements to other two racers. Just now I noticed that all the characters involved are from SEGA IP's.
Now, to the patch notes.

Bonanza Bros
- ALL the sprites have recieved a major rework, including even a new neat looking signpost and spinout frames to give them more personality.

Super Hang-On
- The tires now move on some sprites! It makes the mod less static looking and reflects better It's look in the original game.
- All the sprites recieved minor touch up's and have been recolored, it looks A LOT less dull and muted.
- New minimap icon.

SG 1000 V8
- Now it's two toned, uses Quarry as a default color.
- Sounds have been reworked, including a proper gloat.
- Sprites have been repositioned to look better in the rotations, plus a updated signpost.


I am personally very proud of this update, I wanted to include more but that would also mean having to wait more time to update the Bros mod, leaving them in their old and ugly state.
I hope you enjoy this update! Maybe a new character next time...?
Last edited: Jan 12, 2021

Ｅｎｊｏｙ Ｙｏｕｒｓｅｌｆ...​
In the past year I released my first mod, which was Mac Tonight. Back then I said: "I think I can make his sprite better looking in the future".
Guess what? Today is the future!​
All of his sprites got a big rework! Now he has a new and bigger body to fit better the size of it's big iconic moon shaped head (which also got changed!), a new mugshot and a revised voice clip. With this, all of his inconsistencies and past issues got fixed!

That is it for today! As a little bonus, all of the racers on this pack are now available to be downloaded individually if you prefer.
Last edited: Jan 12, 2021

Another motorsport update.​
Hello again! This time the update focus on the addition of the custom engine sounds to both SG1000 and Super Hang-On. Plus some minor fixes for Mac Tonight.

Super Hang-On
- Updated (AGAIN) the sprites, so now the "8" on the front looks better and all the the rest was revised to resemble a little bit more the arcade sprites, including the signpost.
- Added custom engine sounds, all taken from the arcade game.

Mac Tonight
- Refined the sprites a bit.
- Changed the slow sound (FOR THE 5TH TIME IN THE HISTORY OF THIS MOD).

Now that both these characters have a lua script attached to them, you won't be able to use it on Time Attack, for that reason I am providing a lua less version of them in a zip file.
I was planning to make a bigger update, but I had those done for a long time so I wanted to release it from my folders already...

After some long delays...​
Let's go to the usual patch notes? This time we got a character rework and a little bonus to go alongside it.

Spy
- All of his player sprites were remade from the ground up! The signpost and his personal kart (inspired by the bumper cars in TF2) got general refinements and edits.
- Default color changed to "Navy".

Super Hang-On
- The drift sprite was updated, with the addition of a sprite that was missing from the original game. (For some reason, when I originally made the mod, I thought that the sprite was too big, glad to see that I was wrong.)
- Sprites and colors were refined a bit again, looking more vibrant now.

Nyoom.​
SG1000 was completely reworked into G. Ceara! Completely new sprites and sounds! Now, before you ask "who is this guy?", I will tell you.

In short, G. Ceara is a secret rival NPC in the first Super Monaco GP game, notorious for being tough as f*ck to beat, he challenges you out of nowhere after meeting all the requirements and lets out his famous catchphrase "Your days are gone!", decipted in the signpost. He is also a obvious parody of late F1 Brazilian pilot, Ayrton Senna.

When revising the mod, I found out that the second game had reworked sprites, which looks a lot better than the ones from the first game. Also, all of the voice samples were switched for the ones used in the SEGA CD port, which sounds a lot better.

Also, kinda unrelated to the mod, but, I put all of the previous gifs under Spoiler tags to make it easier to load this page. I guess it worked...?
Last edited: Jan 12, 2021

Oh it's the Plant guy.

Yes, SEGA was added. Enjoy it, because fun is infinite with this mod.​
Click to expand...

B O I
You must log in or register to reply here.