"Ahem...
Fellow badniks, I have been working on a project while you were out to hunt down Sonic." - Eggman started.
- "Much like Metal Sonic, it is designed to copy Sonic. But not only Sonic.
It is designed to copy everything and everyone he sees.
Feast your eyes upon:
[highlight]The Portable Egg-o-Hologram 3.0[/highlight], also known as..."
The Clone Fighter

Th- That's it.
He can shapeshift.

That's right, you can also team up with Metal Sonic as C.F.

Mix and match your strategies with the two robots!

Okay, now that's it.
Special thanks to Rapidgame7, without his help I couldn't have created this addon.

I hope you enjoy playing as Clone Fighter as much as I did making it!​
V1.0.1
Initial release

Yo, anton! Nice work getting this into releases! Been waiting for this since the editing post. Nice work!

Actually, after testing this out with the Real Shadow Mod by Inazuma, C.F can use lua abilities! on top of that, he's actually perfectly compatible with jeck jim's models, since he just uses greyscaled character sprites! Great job!

Hohohoho!
Hey!
This looks pretty interesting.
welp, time to try it out!

i found out it perfectly works with Modern Sonic.
even if swapping can give a small error, the rest is ok and everything works very nice

I switched to clone sonic, and exited out to the menu, and now it won't let me switch.

Micro said:
I switched to clone sonic, and exited out to the menu, and now it won't let me switch.
Click to expand...

i think antonretrojr talked about that one bug when switching

btw i found out that using shadow and pressing Custom action one would not let him switch character.
thankfully you can press Custom Action 2 and still swap using that button (CA1 works with the others but Shadow).

another thing that i like is that it works very well with XMomentum characters.
this truly is the coolest character made

Nothing but positives, Amazing job on this! So far I haven't had any problems.

That guy who did SRB2 Races

I like how you made a simple clone character into an actual fun character. or....characters? idk.

"Hohohohoho! How long i waited 'till to this!" *Proceds to load Clone Figther* "And... FIRE!*

He doesn't seem to work in Co-op for some reason. Maybe look into fixing this? Otherwise, this is a great mod!

WOW, this is unique. Looks really cool, too.
R

I like how the concept is handled with this mod!
Here's something curious I feel may be important to mention.
Oh, and by the way, this is coming from a Mac OS user, so I'm not sure how much things change.
Regardless, I added as many characters as I could (Clone Fighter included, of course) and ran into an issue: When I use Spin charge, the game gives me a SIGSEV.
No error appeared in the console before hand, and it has consistently crashed trying to Spin charge (the 2nd attempt was from a roll, weirdly enough).
The characters that I added were: Junio Sonic, Kirby, Legacy Flame the Dragon, Kanade, Modern Sonic, Shadow, RCharacters (Metal Knuckles & Tails Doll), Skip, EggPack, Gemma, Dirk Chars, Bandages, Neo Sonic, Silver, and Milne.
17 in total, counting Clone Fighter. Maybe one of them causes the issue, but I'm not sure if it's them or something regarding Clone Fighter itself, mainly because the first SIGSEV, I believe, was without adding any characters except CF.
EDIT: Here's a screenshot of a SIGSEV I was able to replicate very quickly. 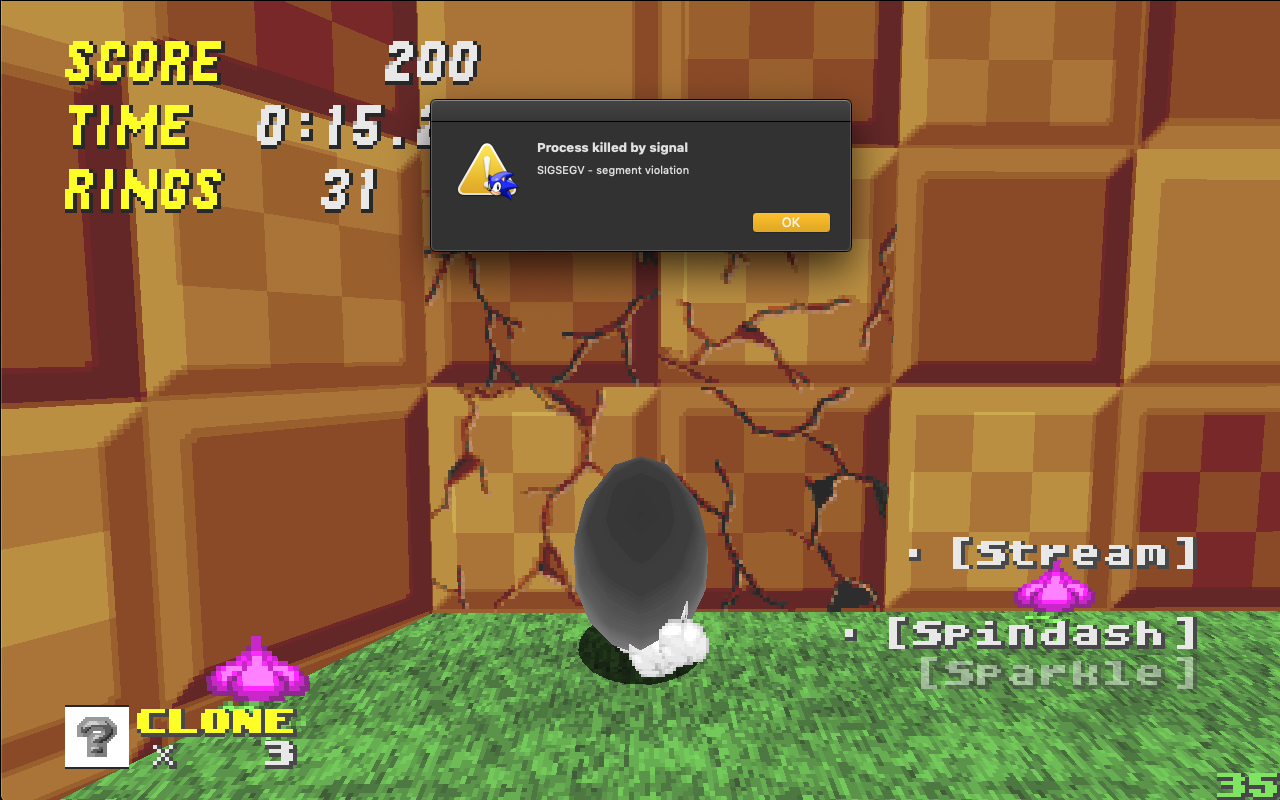 When the imposter SUS

Not what you would expect..

GOTTAGOFAST! said:
I found a bug if you go multiplayer you cannot change as clone fighter and u get a metal sonic with a thok
Click to expand...

You have to enable cloning if you are online.
You must log in or register to reply here.