Dig Pack!
'Cause it's Diggle's Pack!
More info on the main addon page.​

Updated 1.2 - some layout changes, made the track more hard speed friendly. Turned an offroad "shortcut" into a regular, alternate route (it really wasn't all that faster.)

Cool to see you delving into track design as well! This first attempt is really impressive. I never knew how much I wanted to have a Shovel Knight map in Kart. Though more importantly it's simply a lot of fun to race on. Keep up the good work!

Thanks for the kind words, Sunny! Hope you like this new one as well.

I always loved maps that were clearly based on another game or something, but weren't just a port or remake of a pre-existing track from a racing game. Really like how you translated the Shovel Knight levels into a 3D setting, and the tracks themselves have a lot of fun shortcuts and sprite work. Good pack IMO.

Updated 3.0 - New track. Watch your feet and don't fall into the lava.

Updated 4.0 - Another new track! Plains of Passage, the first stage from Shovel Knight, has been added as a new race track.

Updated 4.1 - Map slots have been changed from PU, PV, PW and PZ to DA, DB, DC and DZ to avoid a map conflict with another pack.


Theming on all of your tracks is excellent and faithful to their sources.

Pridemoor keep is a super fun level with some great alt paths and a fun focus on jumps. My main complaint would be the pillar ascent near the end; the springs should really be speedcapped or have something at the top to force the players down because any speed-boosting mod will send you flying path the second set of springs into a long pit fall. Alternatively, have the second pillar be an uphill slant to catch people going higher than usual.


Lich Yard is pretty fun with its alt paths again. My main complaint would be the ending portion having some really tight, blind corners around the bridge supports and making the jump onto the bridge itself is something of a leap of faith. Having a tell above it to aim for would be nice.


Plains of Passage is a mostly smooth track with nice, rolling hills. That said, it does feel a little empty right now in terms of visual flair compared to the aforementioned courses, although the theming is still excellent. I would consider adding a quarter pipe to the far side of the sloped descent into the cave since the turn into it tends to shoot you far to the outside and, if you're unlucky, the pit. I'll admit I was a little disappointed that using the bubbles to jump to the sleeping dragon didn't reveal a hidden alt path on the platform; perhaps an addition for later?


How did I know it was going to be Mushroom Peaks? It was bad enough in MK Wii, and now you don't even have air control on half the bounces XP
I would seriously consider adding red springs before every set of mushrooms because sometimes, progress must trump accuracy. Imagine, if you will, a Mushroom Peaks that's fun to play on. It would probably need a downforce on every mushroom to avoid players going too fast with mods, though...


Of course, it's a hell map, so one can only expect jank since half the point is to be faithful to its infamous original.


Just how much was it to commission the track, by the by?

This is of an older version of Lich Yard but I have to say I've liked all of these in the pack so far. With the exception of that Hell but I'll get to that. Everything looks very much of the aesthetic to Shovel Knight for sure. Lich Yard is easily one of my favorites, though, due to its layout.

I'd have to say of the courses in that cup so far I'm not so much of a fan of Pridemoor Keep if only that it feels just a little bit too big and I'm not so keen on the way the exit's done just before the finish line - I've had it be a little glitchy if you decide you want to turn right after you get shot out towards the finish line. Feels like it should be more centered towards that line instead of being on the far end right near the edge as it is but consider that a nitpick.

The non-SN map is one I'm kind of torn on. On the one hand, I think it's a technical marvel, on the other I'm not so keen with all that it does to you in terms of the course layout because of its ever-changing layout. I think it fills a certain niche well but outside of that I'm not so sure I'm happy with some of the design choices. Not graphically more than the course layout itself. I think this would almost be a candidate for a Hell map if this wasn't honestly fair but I may take some time to think on that. It's a good map, otherwise. 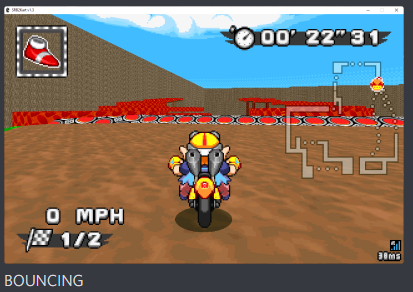 Let's just say, not...really a fan. But I have taken the time to play through it, get it beat, get a couple things figured out and I will be adding it to the private server just to get a feel on the shrieks and complaints when we do get around to playing it. Should be great.

Overall, I've been pretty happy with what I've seen so far and I'm looking forward to more of these.

Updated 4.3 - Layout changes to Pridemoor Keep and Lich Yard, and some cleanup work in Plains of Passage.

Ah yes, Mushroom Peaks. Just the way I remember it. Getting flashbacks of the pre-CTGP era of Mario Kart Wii custom tracks.

Wandering Falls
-Made the shortcut ramp easier to take.
-Trees next to the final ramp are no longer bouncy.
-Every season now has different music to go with it.
-Toad now guards the secret.
Click to expand...

Read the rest of this update entry...
S

Wandering Fall's can cause memory issues with other peoples games, crashing them.
You must log in or register to reply here.