(The sidemove input of an analog stick's turning input is also half what it is on keyboard or D-pad, but this is inconsequential to the tune of 1/64 unit of aerial speed when springing due to how that input is used.)
Last edited: Dec 20, 2019

Seems like you forgot to merge the fix into your fkart-with-shaders branch, I don't know anything about gitlab so I don't know how to make a pull request myself to fix that or anything.

Minor, but a player who is respawning appears in 0th place for one game tic.
Edit: Also noticed later, but that player's timer is also wrong for that same tic.

Edit2: Tacking this on to avoid double-posting, but looking at certain replays after loading specific addons causes a crash (SIGSEGV). There's a zip file attached to this post containing the related RPT file.

Edit3: Found a bad waypoint on Ancient Tomb Zone; it's marked as 3 instead of 4. This is on section 1. I've attached a picture here too.

https://imgur.com/ylAdZmi Using a pogo spring near the teleporters in Mementos softlocks you until you are hit.
N

Sometimes replays desync at the start with spectators appearing in the replay (and vice versa for the opposite), but this only happens the first time a replay is viewed after watching a specific one; it does not happen if the same replay is watched a second time in succession.

Opponent arrows in Battle mode don't update if the player changes viewpoint while the game or replay is paused.

The server name used for the default name of a replay is blank or wrong if you join a server by IP; leaving and rejoining the same server seems to fix this.


The Record Attack music or voting music may get replaced by the "No Contest" music if a player leaves or becomes a spectator while the game is at intermission or voting.


Player names in replays sometimes get cut off or be changed to a color code name or a name where the game considers that name a "bad name change".


Edit: I later noticed the "replay start desync" thing is caused by PF_WANTSTOJOIN not being synced when you load a replay. If this flag is set on one of the players and you go back to Replay Hut before the replay ends and watch another replay in which said player exists but is a spectator, that player will appear in the replay anyway as if they were playing. Note that three players have this flag set during the Silvercloud Island replay but not at the start of it:

Loading a net-safe addon (e.g. a music/sound pack), then trying to join a server with max addons loaded causes a SIGSEGV crash on the client.

The client refuses to load the last addon on the server's addon list, then proceeds to try joining anyway.

In my case, it appeared to crash the entire Lua interpreter, though I don't have enough knowledge to decipher anything past that.

I have attached a zip file with both the log and the RPT file.

As you know, V1.2 added a wind sector up here to prevent a skip using the SPB explosion to skip a fair amount of Paradise Hill Zone. However, one of the earlier findings of this skip utilized blowing yourself up on the left side of this slope and not the middle, which you can still do here.

There is also some random invisible fofs you can land on over the off-road bits underwater here. The bottoms aren't solid so you pass through them. It's rather strange.

So the v1.2 update has rolled out and there are some exploits that have not been fixed and some that have even been added in. There were some patches of offroad that had glue on them in v1.1 that is gone in v1.2, the most notable ones being the offroad ramp in Green Hills and the offroad cut in CK Cloud Tops.

There are also some exploits that have not been fixed for netgames. They are the infamous u-turn cut in CK Chao Circuit 2, The u-turn skip in Silvercloud Island, and the shoeless jump in Boiling Bedrock.

I have .gif files of these skips in this Google Drive due to having trouble uploading them in this reply. https://drive.google.com/folderview?id=1Pw7K0V2OwU7UUQ_Trgaz5TmSODSvurkH
Last edited: May 13, 2020

Lua scripts that write directly to the player cause the "Ghost is not a record attack ghost" error. To replicate, try these steps:
-Load any mod that has a Lua script that directly writes to the player (HOSTMOD works, most custom game modes would probably work too)
-Load any mod with gamedata (RA Extended)
-Try a Record Attack run.
-Try another Record Attack run, with the ghost you just made visible (Show Last)
-Game will crash with "Ghost is not a record attack ghost"

Note: Ghosts made in v1.1 work fine. This is a new bug in v1.2. It may be caused by lua variables being written to the replay file that weren't written previously, or some invalid parsing of them.

I've attached an example of two ghost files in an ASCII format; one of a v1.1 ghost, and one of a v1.2 ghost on the same track.

Likely in g_game.c, around line 5688, where it tries to grab the RNG seed the ghost was recorded with (discovered after some testing).

Here's a bug in the linux version. I'm not sure if this is just a problem with my download of 1.2, but ever since getting it, trying to open Kart in opengl mode causes it to sigsev immediately. If it helps, I'm running on ubuntu.
N

In certain maps, if a player's checkpoint counter exceeds the number of checkpoints there are on a map, it causes a player that is on an earlier lap or that has not yet finished (or No Contested) to rank higher or be tied with players that are in a later lap or have finished:

I later noticed that the final rankings in battle mode get messed up if some (but not all) players get No Contest via Lua (unless all No Contest players have the highest player numbers; if P1 gets No Contest then P1 always wins):

So in record attack, in the pause menu, if you press confirm and cancel on the same frame when your cursor is on restart or abort, the game crashes. The crash logs for the crashes is in the last two entries in the attached srb2kart.RPT file in the google drive. https://drive.google.com/open?id=1psEnL2bVfk-KllGk5dEVeQZFv6ZRLBsv

The Only Beat Main on SRB2K

Got bumped into a softlock in Casino Resort (To clarify, this isn't the Rev version)
The best fix overall would be to lower the elevated blocking floor so the player can drive over and back onto the main track.

I'm pretty sure this has existed since v1.0.2 netreplays...

Regal Raceway has a couple of huge slimetrails/sector errors when looking the wrong way in the underwater section.

Also, encore mode colormaps in OpenGL are broken due to the RGB values being bitshifted before being sent to the "NearestColor" function instead of after.

Does anyone know what the issue with "Z_Free Wrong ID" is? It's an error message that keeps showing up out of nowhere every so often and I have no idea why

is bad at Zone Builder

theres a fucking cockroach in my room

Contest Winner🏆
@MotorRoach what the hell were you doing in his room?

In OpenGL, playing in first person with 3D models on causes your 3D model to be rendered instead of being hidden away (like it would happen with 3D models disabled). This, unfortunately, makes it really distracting to use. 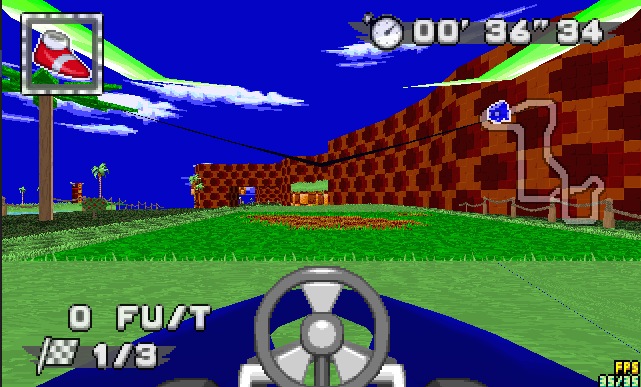