Mine is Cool Ranch!

If you eat Doritos and you expect a flavor is a lot more better than ever, what's yours?

Are you going to tell everyone that my favorite Doritos flavor is the regular one?

FishandChips said:
Are you going to tell everyone that my favorite Doritos flavor is the regular one?
Click to expand...

Regular good as hell and nobody can tell me otherwise

idk how doritos taste like because in my country they do not exist, like, at all... i can only dream about that yellow triangle...

Well at least I have Cedevita and Eurocrem and Domaćice xd

the regular cheesy one is good enough for me

This is a difficult question for anyone outside of America to answer because, for instance, we actually have an entirely a different set of flavours here in Australia.

For starters in the USA your Nacho Cheese is the "red" Doritos, but for us Nacho Cheese is in a yellow packet, with the "red" ones being a different cheese flavour, Cheese Supreme, which some other brands (such as CC's) call "Tasty Cheese" (basically cheddar cheese). But which one of our cheese flavours actually matches your one? Conventional wisdom would suggest same title = same flavour, but the packaging colours are tripping me up. So right away answering with "cheese" only raises more questions.

Also we don't have the infamous Cool Ranch in our regular lineup so I've never gotten to try them, which is a shame since ranch flavoured corn chips sound awesome. We do have "Mexicana", which is, idk, a mexican salsa-type deal? We also have plain salted ones, titled "Original", which from what I understand may refer to a different flavour in other territories. And of course they do limited edition flavours all the time.

In any case, I don't actually know what my favourite is. Lately I've been on a desperate quest to find a way to articulate what the difference between Cheese Supreme and Nacho Cheese is and determine which I actually prefer. Cheese Supreme seems to be everyone's go-to, but i dunno.

I don't usually eat those things but usually I like them very spicy.

take me to your xbox to play fortnite today

I'll Begin said:
Also we don't have the infamous Cool Ranch in our regular lineup so I've never gotten to try them, which is a shame since ranch flavoured corn chips sound awesome.
Click to expand...

Friends i bring excellent news from Australia because look what's back! 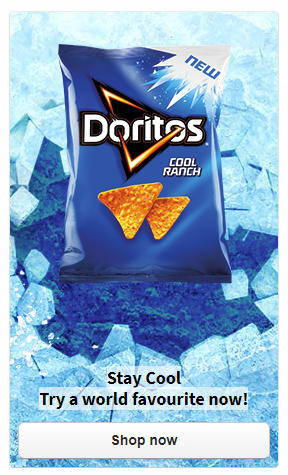 Thai Sweet Chilli by itself, or Cheese Supreme (whatever the red one is) with dips. I find Thai Sweet Chilli to have the right kind of Casual Spice™ when I just want to snack, and cheese supreme for those times I want to experiment with dips, or can be bothered getting one

As someone in the US who's only ever had four flavors of Doritos (those being Nacho Cheese, Cool Ranch, Spicy Sweet Chili, and Blaze), I'll have to go with Spicy Sweet Chili. I'm probably going to have to try some more flavors though, haha

FishandChips said:
Are you going to tell everyone that my favorite Doritos flavor is the regular one?
Click to expand...

Haha you kinda made me laugh.