Sonic Man X is a mod that changes SRB2's gameplay to resemble that of Mega Man X. Shoot your way through scaled-up enemies with a chargeable blaster, hunt for permanent armor upgrades, and amass an arsenal of special weapons as you take down each boss in your way!

Sonic Man X is best played on SRB2 with synchronized I/O support, since it allows you to save your upgrades between play sessions.


*Press Spin on the ground to dash. Hold Spin to dash farther. Jump while dashing and you'll retain your speed.
*Press Spin on the ground in front of a narrow crevice to slide through it.
*Press Spin to enter and exit vehicles.
*Press Custom 1 to fire. Hold Custom 1 to charge, then release to fire a more powerful shot.
*Use the weapon switch buttons to switch weapons. Defeat bosses to obtain more weapons.
*Rings won't protect you, but you won't die until your health bar is depleted.
Sonic Man X is compatible with Great Divide, and it's designed for compatibility with most "standard" custom characters and levels.

Sonic Man X has documentation that explains its console commands, as well as how to make your mod respond to Sonic Man X's presence if you care about whether they play nice together. The most important things to know are the console command smxhelp and the fact that mobjinfo[MT_NULL].sonicmanx is true if and only if Sonic Man X has been added.


Version 1.2
*Sonic Man X is now now compatible with synchronized I/O, but not with SRB2+I/O.
*Added the refillhealth command.
*Added help messages for weapons.
*Crawl Laser travels up walls and deals double damage to targets with long invulnerability periods.
*Napalm Storm bombs detonate on contact.
*Pilotable Brak Eggman has a visible indicator when it's empty.
*Players lose only half of their rings upon being hit.
*Super forms behave differently. They can charge and fire twice as fast, but can be damaged. Players can also turn Super even if they have shields.
*Ringslinger gameplay has been reworked. The buster is no longer useable, thrown rings deal more damage, and health refills spawn at random Chaos Emerald spawn points.
*Player movement has been tweaked.
*Refill powerup visuals have been tweaked.
*Some help messages and dialogue have been tweaked.
*Added P_UseWeaponEnergy.
*P_BlockingWall and P_SpinBlocked have been replaced with P_CanMove and P_CanSpinMove.
*Removed the CacheHUDIcon pseudo-hook.
*Added support for skin-specific default weapons.
*Popped monitors respawn correctly.
*Team monitors are properly solid to opposing-team players.
*Pilotable Brak Eggman can't be entered while it's in its death animation.

Oh wow, i was expecting a MegaMan character, but not a Mod of X itself.

Nonetheless, it's great! i haven't played all of the X games in a looooong time, so i forgot about what most weapons do, and this makes me want to play them again.

one bug though: in SP, firing the Buster with the Bot makes it ALSO Fire, but it actually helped me instead of interrupting me.

EDIT: A feature i would like to be added: maybe have the Monitors get destroyed when you shoot them? it was odd when i shot them and they didn't pop.
Last edited: Sep 13, 2017

Bots firing along with you is intentional. They'd be pretty useless if they never attacked, after all, and you still get the points if one of their shots destroys an enemy.
N

That's probably because Sonic Man X relies on exploiting an HUD hook to determine the angle of the player's camera, and thus what direction they should try to move in when they move. This is necessary for analog control compatibility, but I'm pretty sure analog control is disabled in netgames, so the problem shouldn't be hard to fix for the next update.

EDIT: After digging through an old thread or two on the subject, it looks like analog control is actually allowed in netgames now, but there's a ticcmd variable that stores the camera's angle in analog mode, and the game syncs it for you, so I can probably just use that.
Last edited: Sep 14, 2017

I'm a bit disappointed this is not what I was expecting.

I tried everything I could(aside from console cheats), and I still can't find the arm parts upgrade!

The game refers to them as the Buster Parts, in case that's what's confusing you. They're definitely there, though, and they're accessible by all three vanilla characters.

what I want to know is where they are, or at least what zone,cause i'm in CEZ.

I've encountered a problem with the mod. For some reason, it crashes the game on starting Egg Rock Zone 2.

I just tried it with PlusC and it didn't crash! Odd...

I encountered a weird spawn while playing with PlusC in Techno Hill Act 1. Brak spawned, but without his shield. He also couldn't move, or didn't try to move. I was in OpenGL. 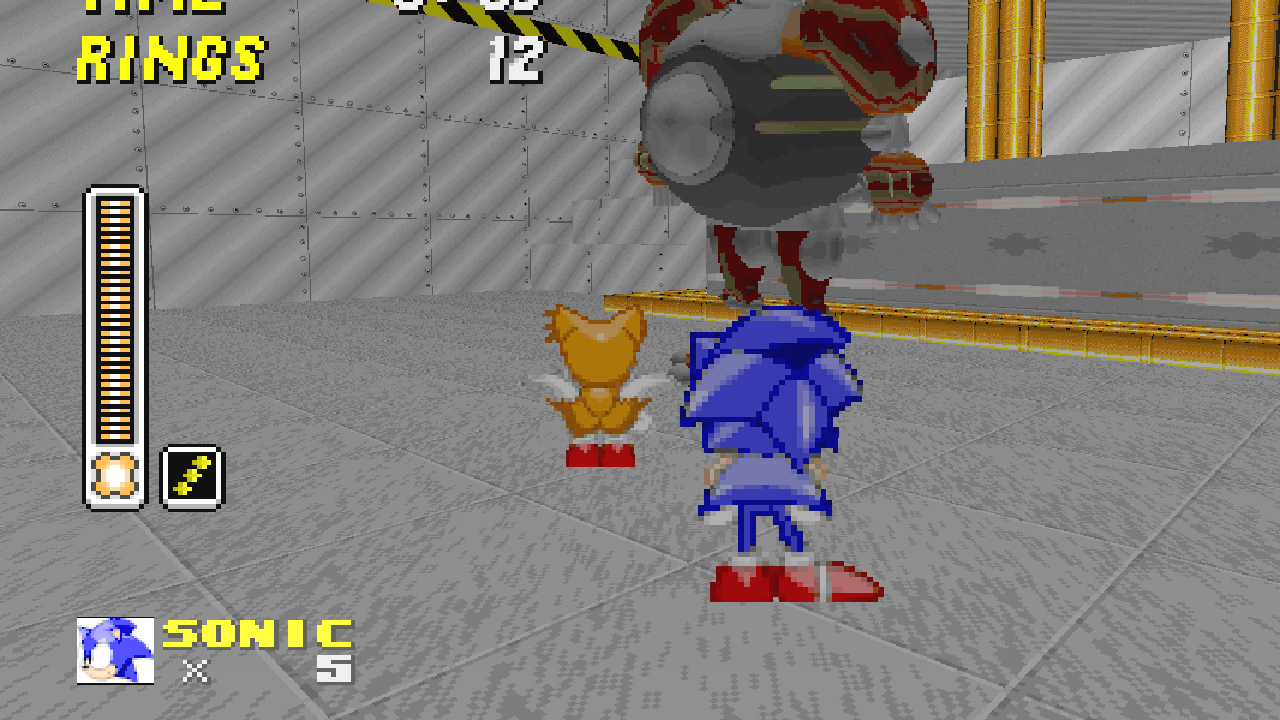 That Brak Eggman mech is empty. Try jumping on top of it and pressing Spin.

Maybe I should add a flashing arrow or something to indicate that you can do that.

Updated to version 1.1. The desync problems in multiplayer should be fixed now.

RomioTheBadass said:
I'm a bit disappointed this is not what I was expecting.
Click to expand...

This is what I need in my life

Hey, this wad is just awesome, everything is cool with this type of controls.
But it can have.....Mega Man X musics in the game to be like, you know, like you're playing a crosover fangame of Mega Man X.....just a sugestion :/

Does nothing at all.

Xelork said:
But it can have.....Mega Man X musics in the game to be like, you know, like you're playing a crosover fangame of Mega Man X.....just a sugestion :/
Click to expand...

I find this mod interesting, and it definately DOES add quite a bit of gameplay to it!
I like how it works so far, though I may have to suggest changing the mech sprites sometime in the future- I thought it was a unfunctional enemy!

I'd also suggest changing some of the weapons- Yes, they are cool, but at the end of the day the X buster is still far, far superior to most of them.
My suggestions are below:


Perhaps make the Crawl Laser crawl up walls, or change direction to go after a foe.

The goop spread is... Kinda useless. If I could suggest, maybe make it a lobber-type weapon that shoots one BIG goop forward in an arc.

The missiles are pretty good as they are.

The Shield is pretty good as it is.

Metal's energy shot is... Just a bigger X buster that's already charged. If I had to suggest a change, maybe it could be a sort of high-energy ram that sends you blasting forth in a controllable dash, similer to the thok but it lasts longer in the air.

The Carry Missiles from Brak 1.0 are pretty good as they are.

Serious custom 1?. why didnt u puted on ring toss?? it were going to be more simple

Cheese's god is not yellow and yes green
Click to expand...