Welcome to my pet project, a direct port of Paladins's Siege mode to SRB2. In this gametype, you must learn to work with your team for a common objective using renewed ringslinger mechanics.

So how do I play?

This version of Payload is comprised of two phases. In the first phase of each round, there is a Capture Point in the center of the arena that must be captured by either team, and that can be captured when at least one player from a team stands in its area. If a member of the enemy team is also present, none of the teams will make progress until their opponents are completely removed from the point. The more players of the same team there are in the point, the faster the capture will be, so get your team on it!

When either team manages to score 100 capture points, they gain 1 Objective Point and a Master Emerald will spawn from the capture point. In this second phase, that team's task is to escort that Emerald to the end of the track by standing near it, while the opposing team has to stall their progress at all costs. If the push is successful within the time limit, the pushing team gets an additional Objective Point, but if not, the enemy team is the one to receive the point.

First of all, you're going to notice a group of bumpers like the ones in Kart spinning around your character. Forget rings - now those indicate how many health points you have left. Rings now only serve as your ammo, so you won't drop any if you get hit, but they won't save you from death anymore.

Additionally, Payload arenas have no collectible weapon rings: each vanilla character has their own set of weapons to fight with, a mechanic provided by TehRealSalt's Classes Lua script. Sonic is equipped with Automatic and Scatter, Tails wields Grenade and Bounce and Knuckles has Bomb and Rail as his weapons of choice. You have unlimited ammo, but there's also a cooldown for when you use your weapons enough. You can also add your own weapon settings for custom characters with the addclasses command. Be sure to check this post for more info!

Also, rounds will not start until there's at least one player in each team, so if you see the pre-round counter looping back to its initial count, be sure to wait for someone else to join the fray.

What maps are there?

Currently, this mod comes bundled with Generic Water Zone by Jimita (& a few touchups by yours truly). It's a cave-like arena with a body of water that is constantly rising and receding. It's currently the only map in the rotation, which is why it loops to itself when the match ends. Ideal matches usually have 3-4 players on each team. Ideally, more maps would be needed to make a sizeable rotation that can provide different playstyles and experiences of the gametype - but I'm not that much of a mapper myself.

Cool, I wanna make a map for it!

Good! All the necessary assets have been prepared for you: just open ZB with payload.wad as a resource and follow these instructions.

Thing type 2001: Contesting point
This is an invisible object whose radius determines the contesting radius for the game's first phase. It must be placed in the center of the arena, in equal distance to both bases. You will only need one of these per map.

Thing type 2002 and 2003: Red Waypoint and Blue Waypoint
These objects are also invisible and determine the path the payload will follow across the map depending on which team managed to capture the point. The thing's angle determines the waypoint's order, starting from 1, which is the first waypoint from the contesting point. When the payload reaches the last waypoint of its sequence, the pushing team scores 1 point. One sequence from each of these types must be placed on your map, and they must be identical and symmetrical to the map's orientation for balance: Red Waypoints must make a path into the Blue base, and Blue Waypoints make their way into the Red base.

Linedef types 800 and 801: Block Blue/Red Team
When applied to FOFs, these types will bounce off players of the opposite team, or any player during pre-round. They will also block all kinds of thrown rings from passing through. Use these to close off each team's spawn points - they're supposed to keep players from roaming free when and where they shouldn't. It's also recommended to make these FOFs at least 60 fracunits thick so Sonic can't abuse his thok to pass through.

Finally, Payload runs on CTF, but it also needs you to add the Custom gametype to your map's level header so the script knows where to run properly. You will also need to place both flags outside on bases built outside of the map so the game doesn't complain about them being missing. Just make sure they aren't accessible! 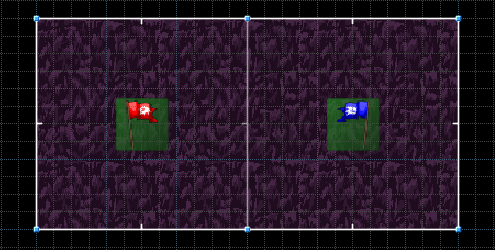 Additionally, you will notice that the scripts embedded in both maps contain three variables in common you can use to customize how these items will behave in your map. You need no prior Lua knowledge: just copy them into a Lua lump in your wad and modify the values as you wish.

payload.radius determines how wide the contesting point will be in the three axes. The payload's contesting radius will always be half this distance. If not specified, this will default to 360 fracunits.
payload.speed sets how fast the payload will move when escorted. When the enemy team is pushing it back, it will always be half this speed. Sets to 2 if not specified.
payload.pushtime determines how much time the pushing team will have to push the Emerald to the enemy base in the second phase, and at the same time, how much time the stalling team has to hinder the pushing team to stop them, in seconds. Defaults to 180 seconds, or 3 minutes, if not specified.

There are also two variables which are read-only, but you can use them to customize how your map behaves through Lua. payload.phase informs the phase the game is in. 0 is for the pre-round phase, 1 is for the capturing phase, 2 is for the pushing phase, 3 is for the round result announcement phase and 4 is for when the game is over and the winners are announced, while payload.domteam informs which player is currently capturing the objective or pushing the payload. These are used in the sample map and in the current arena to make the point's translucent floor glow in the dominating team's color. Don't change these manually - only reference them.
Aw, I can't make a map for it but it's still cool!

You can still contribute by providing suggestions on how to improve the gametype, be it in balancing, aesthetic, or gameplay ideas. Also please report any glitches you find! It's already a great help.

As of suggestions, I've been already requested to include a pure TF2-like Payload mode as well as a pure Point Capture mode and I'd say that would depend on the success of this one. There are other things I'm thinking may be necessary to add (bumper regeneration?) but the first step in all of this is to gather enough feedback. So please play it and tell me what you think of it!

It isn't actually a beta - more like a reference to the fact Paladins has been stuck for years in a "beta" stage despite being already a full-fledged game. I plan to constantly develop this gametype, so maybe you could call it an eternal beta?

The ZIP file contains the wad necessary to load the gametype, Generic Water Zone and a sample map (payloadtest.wad) that more or less illustrates the basics of a Payload map.

I've just read through this post, and I've got to say, this looks really cool! Someday soon I'm definitely gonna host a server with this. I might even mess around with making a payload map. Overall this is a great mod, and I can't wait to try it out! Nice job!

This feels sorta it was inspired on Team Fortress 2, but anyways, wish i could host it! but my router got changed :/

Honestly, I think it would be better if Tails had Rails. But anyway, not bad.

Is it possible to edit the amount of bumpers each individual character has? I was messing around with addon characters when I noticed characters like Knuckles, Rouge, and Tikal had 4 bumpers compared to other characters such as Sonic, Shadow, and Inazuma with 3, so I came to the conclusion that it was their glide&climb feature.
I know that CobaltBW's Basic Health Script uses a system where characters with the Glide&Climb ability gain an extra hit point, so I was wondering if it was something like that, and if it was editable to make some characters and/or matches more interesting.
Thanks in advance!

Moderator
Sonic Team Junior
Judge
In fact, I've placed a handicap for Knuckles and other characters with gliding/climbing as an ability due to their relative lack of mobility. This mode won't be receiving any updates as of 2.1's remaining days, but I'm considering allowing for more customization in the 2.2 port and the bumper count flexibility sounds like a worth addition.
You must log in or register to reply here.