Oh snap, this thread reminds me of the days when I tried experimenting with alternate colors for 2.0 back in like, 2014 or so.

http://i.imgur.com/5WHMljc.png
Most of them were pulled from other sources but there were a few that I crafted myself, mostly below Dark Gray. And as a quick experiment here's the Amber, Cerulean, Diamond, Grape, Mango, Persian Blue, Pistachio, Salmon, and Turquoise from that list applied onto the template, using the exact color schemes from the list. I may improve on these colors or design a few more with the new 2.2 color palette if I'm feeling adventurous.

Either way I am hugely in favor of this improved palette selection, especially the option to save it as a default. Sapphire looks like my kind of color.
Last edited: Aug 10, 2017

Hijacking the thread. (or is it rejacking? eh, either way)

I made a collection of true color skin colors, and wanted to know what your thoughts were on them, as well as what truecolor versions of other skincolors other members of the community have made. This does not have any devs behind it, so don't expect anything to be made of them: I just want to know what creative liberties the community makes if they were not limited to the SRB2 Palette when it comes to skin colors. 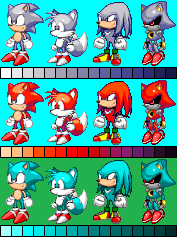 From top to bottom, you have true color versions of Slate, Flame, and 2.1 Teal.

But yeah, let me know what you think, and what you have yourselves.

EDIT: I touched up flame to be a bit more orange. The paletted version is below, to be used for comparison. 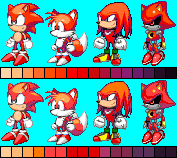 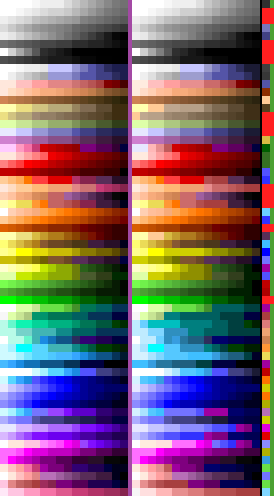 So I decided to see what skincolors would work in 2.1

Kart Krew™️
Seems that most work with 2.1 with a few hitches. Like look at the colours that are in the aqua pal they are drenched in teal. Same thing happens with the purples. 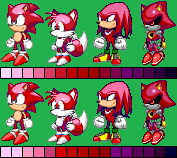 Decided to try a new method for truecolor skincolors, with Ruby.

Again, it would be nice if other people could get in on this too.

Kart Krew™️
I'm gonna be real with you: I think the truecolour ramp looks worse than the palletised one. You have more freedom, and the bar underneath the characters is much smoother, but it washes away the contrast on the characters themselves.

I also think people aren't engaging with this because it requires a different set of skills to the traditional index picking. Constraints are the mother of creativity - if you have free rein to manifest everything you could ever possibly want, where do you start? And why? It's why pixel art is super popular in indie development. It also doesn't help that there's no perceived reward - this topic really took off when I put out the call of a contest related to SRB2 development, something that's traditionally mostly taken place behind closed doors.

Maybe this will help you reshape your approach.

First off, I want to thank toaster, for letting me know what she thinks about the skincolor, as well as the advice regarding the lack of contrast.

She also confirmed what I feared: that people were not getting involved due to the fact that there is no interaction with future versions of SRB2, since that is the moment when the thread originally took off.

Anyway, for the people wondering what that method was, I just blended three colors together for each color: the central color, and the two colors on the left and right of it, using white and black for the "off the table" colors.

This is cool and all but this makes me wish FSonic didn't look ugly like in the pictures there, and that there wasn't a limited SRB2 Color palette
You must log in or register to reply here.