Dimension-hopping and time-travel have been Sonic elements since the first 2 games in the series and consistently throughout the franchise history.

Just going back to the start of the thread, I don't believe Colors and Unleashed exist in the same timeline. In one of the games, Sonic is characterized well, in the other... ARGH.

GameJoshX9 said:
One of my biggest issues with Sonic games is just how inconsistent the world is, as far as I know, Angel Island is the only place that has remained consistent.

I've always thought of it as being where some areas are occupied solely by mobians, whereas others are by humans, with some areas housing both.
Click to expand...

I think that Angel Island got transformed into a small floating rock with the Master Emerald on it when Adventure came out. And the Master emerald wasn't seen on the Modern timeline for some reason. In Mania Angel Island is still as in Sonic 3, thought. For the other places, even thought they also remained the same in Mania, they are just virtual reality caused by the Phantom Ruby and we do not know how exactly does Green Hill look now in the Mania universe.

WasifBoomz said:
Just going back to the start of the thread, I don't believe Colors and Unleashed exist in the same timeline.
Click to expand...

Absolutely nothing contradicts that, Colors is Unleashed's direct sequel like how Heroes is to Adventure 2 (despite the different tone)


WasifBoomz said:
In one of the games, Sonic is characterized well, in the other... ARGH.
Click to expand...

The only thing making the storybook games canon is that quote from Generations, but spin-offs should be put aside from the serie because they're just side-stories that have little to no importance to the main games.

ffoxD said:
I think that Angel Island got transformed into a small floating rock with the Master Emerald on it when Adventure came out.
Click to expand...

Then explain what this is.


That aside, One possible explanation is breaking the Sonic Series down into five different dimensions based on the following eras in Sonic's history: 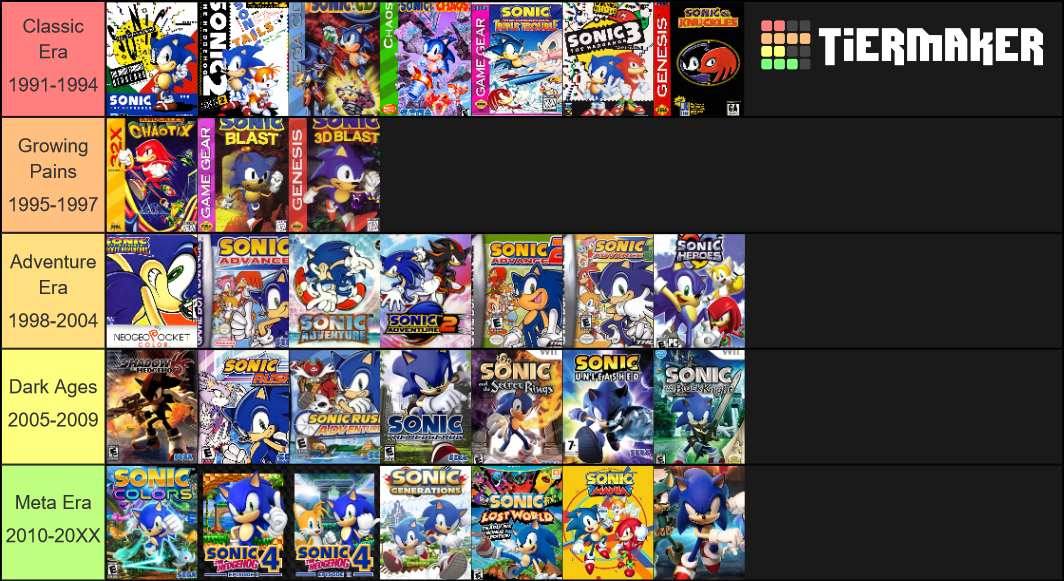 Obviously, this list is going by release date, rather than chronological order. But you could take some of the games listed here, and organize them into a somewhat-feasible timeline. Putting them all in one big linear or non-linear timeline just results in everything falling apart after SCD or SA2.

Treating different games as taking place in different dimensions that (sometimes) cross over each other make things a lot more consistent all of a sudden, as well as explaining things like character personalities, like how Tails became a little know-it-all in Sonic Lost World.

Weird, in-game it looks like this...
I am so confused.
Maybe the cutscenes are a parallel universe where everything looks and works better...?

There's at least 3 different emerald shrines on Angel Island, one indoors (Hidden Palace, S3K), and two outdoors (Floating SA1, Desert SA2). It just so happens that this one is floating.


In SA1, Angel Island crashes into the sea nearby a landmass, which allows it to accessed by train and explored. I'm pretty sure the majority of the mystic ruins outside of the train station area take place on Angel Island due the parallels the stages draw.

GameJoshX9 said:
That aside, One possible explanation is breaking the Sonic Series down into five different dimensions based on the following eras in Sonic's history:

I disagree with this tierlist simply because games such as 3D Blast and Chaotix, despite both being spin-offs) are still a part of the Classic era.
Shadow the Hedgehog is a spin-off that is a part of the adventure era (because it's basically Heroes' sequel which itself is SA2's).


I also disagree about the Rush game being a part of the Dark Age (I would remove handhelds and 8-bits game from the main list).


As for Adventure 1's Angel Island it's quite inconsistent with the Genesis games (pretty much like how Unleashed and onward was to the Adventure era).

I was going through the original stories for Sonic 1-Knuckles and I found out that even the classic games had their inconsistencies, here's an excerpt from a translated version of the JP Sonic 3 Manual:

The next thing Knuckles knew, he was sprawled out at the entrance to the altar, having been knocked out by whatever had happened. Regaining consciousness, the lone echidna's first thought was of the Chaos Emerald inside, running back to the altar. Looking about at the half-broken area, he could not find a single trace of the emerald, with not a clue as to where it could have gone. Emerging out of the sacred chamber in a daze, Knuckles was unsure of his next course of action, glancing out at the horizon. It was then that he saw it, a strange, almost egg-shaped object embedded into the landscape. Snapping back to reality, Knuckles wondered if this object was connected to an ancient legend that rushed to the forefront of his mind, the egg of the legendary dragon...


Over the next few days, Knuckles explored the rest of the isle assessing any damage as he went to the other six Chaos Emerald altars, finding each in the same state as the first. Refusing to give up, the guardian continued to investigate, knowing that the answer to what had just happened must be somewhere on his island.
Click to expand...


I then realized that this could be referring to the Master Emerald, implying that there are 7 different Master Emerald altars on Angel Island. Issues in translation perhaps?

GameJoshX9 said:
I was going through the original stories for Sonic 1-Knuckles and I found out that even the classic games had their inconsistencies, here's an excerpt from a translated version of the JP Sonic 3 Manual:
At first I thought it was referring to the Super Emeralds, but in-game, the only altars for the Super Emeralds are in Hidden Palace, not scattered all over Angel Island.


I then realized that this could be referring to the Master Emerald, implying that there are 7 different Master Emerald altars on Angel Island. Issues in translation perhaps?
Click to expand...

You wanna hear a joke? Sega of America had a different view of Sonic's story and lore than Sega of Japan (for exemple Mobius was entirely made up for American audience, while in Japan Sonic's world was basically an alternate version of Earth because he was born in Christmas Island, a real life location).

Angel Island in SA1 is that enormous rock wall to your left as you leave the train in Mystic Ruins, not the smaller island with the Master Emerald shrine on it. Red Mountain and Ice Cap both take place on Angel Island.

Stonecutter said:
Angel Island in SA1 is that enormous rock wall to your left as you leave the train in Mystic Ruins, not the smaller island with the Master Emerald shrine on it. Red Mountain and Ice Cap both take place on Angel Island.
Click to expand...

How did people get there quickly and without traces of any big damage from the fall?

I can't explain the lack of major damage around the area of impact.

The people are only wandering around in the Mystic Ruins. You don't see any on Angel Island.

Take a look though, I've gone into the game and taken a few screenshots to make it easier to see.


Here are two shots of Angel Island from Tails' workshop. 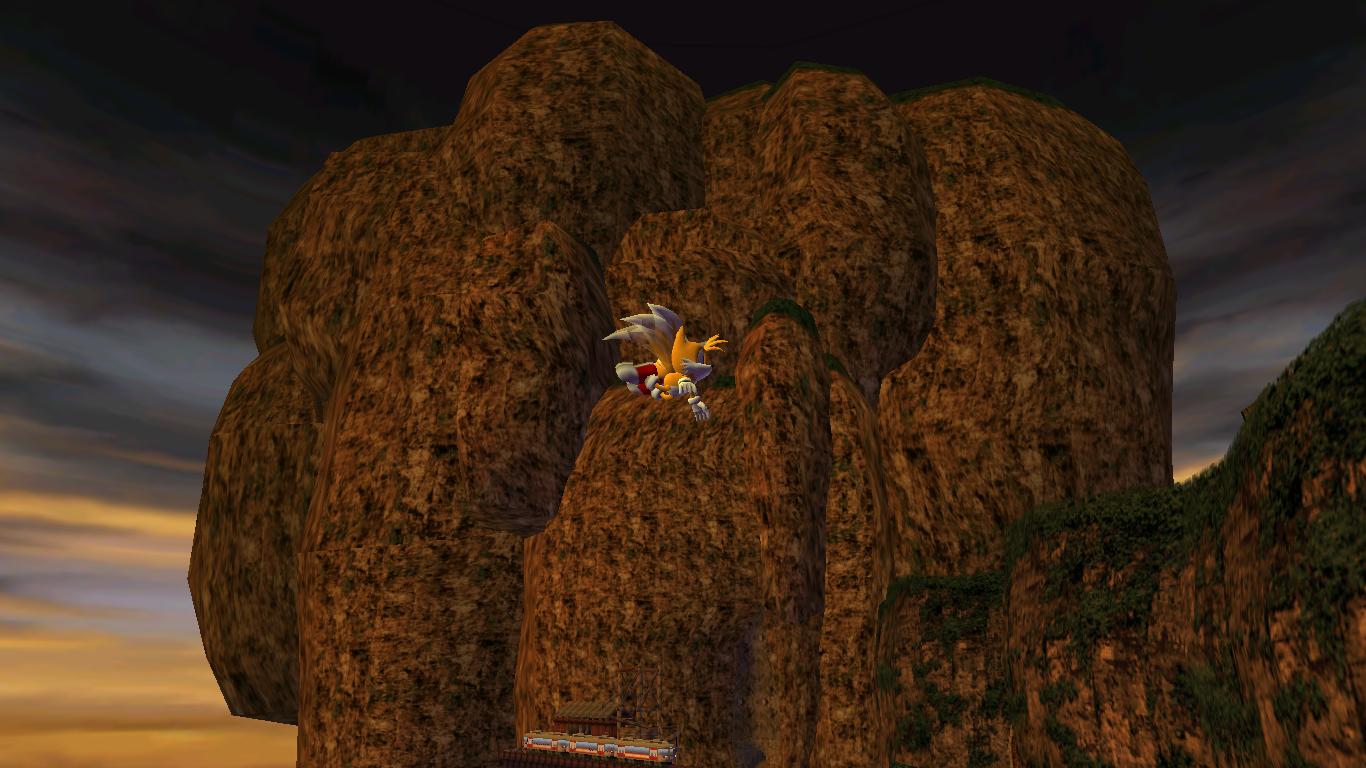 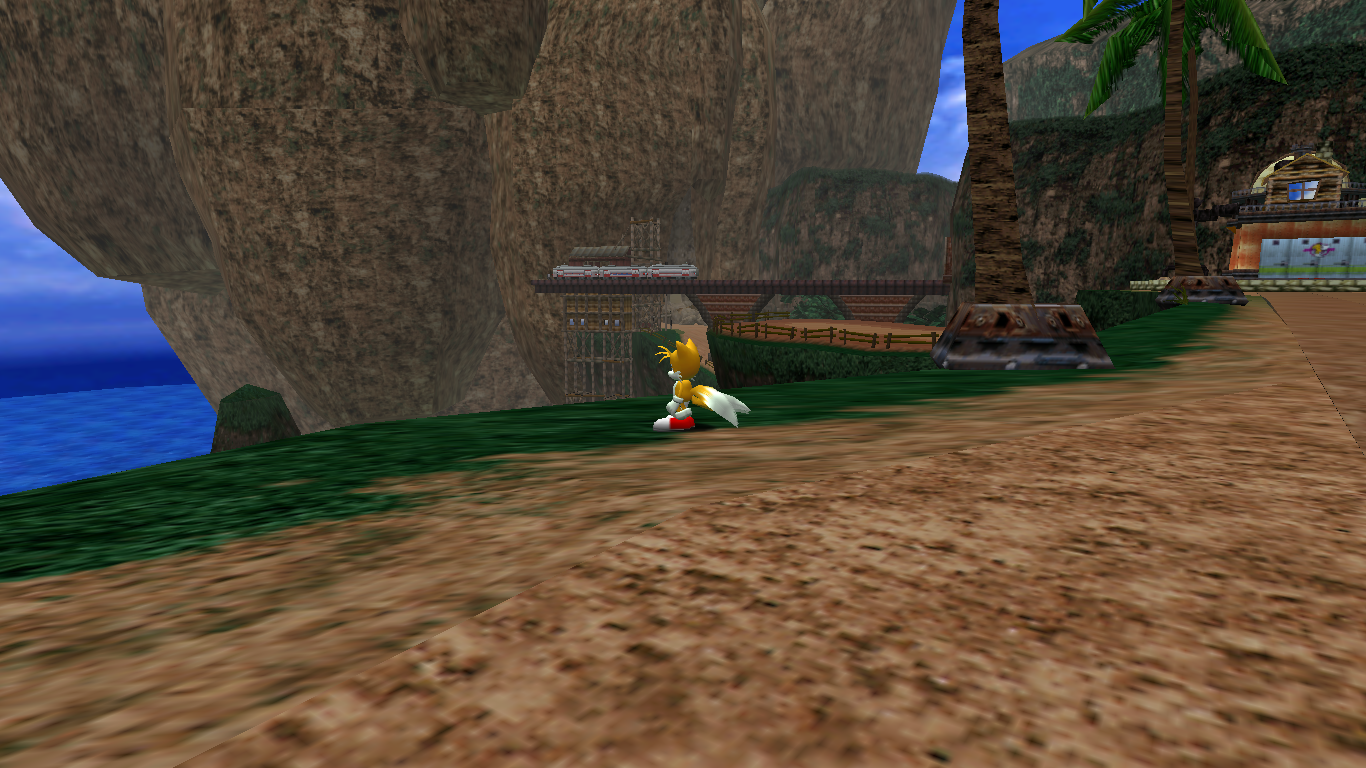 Here is a shot from the emerald shrine. 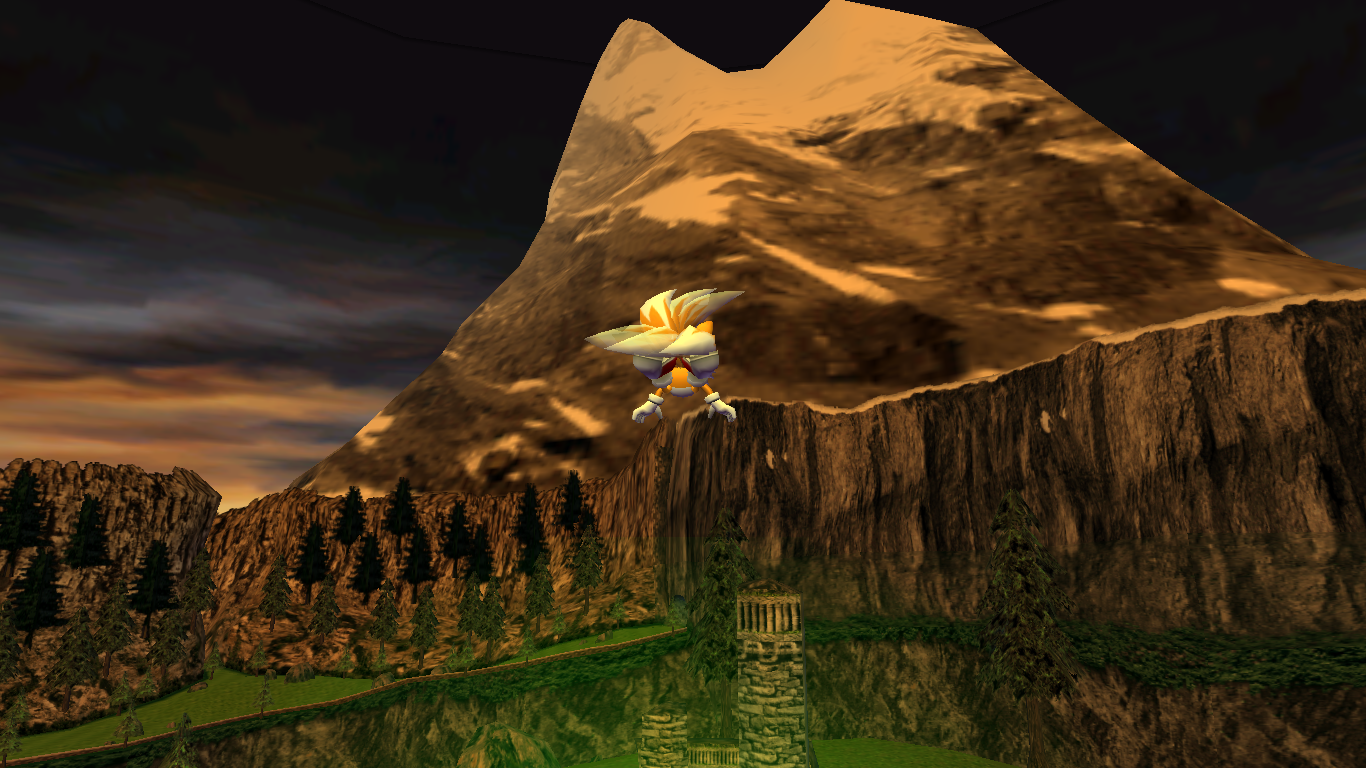 Note that neither the train, nor the trolley pass into Angel Island, only through Mystic Ruins.
Last edited: Jun 12, 2020

So when the hole opens up in Mystic Ruin it's for Angel Island?

The one with the entrance to Ice Cap? Yes.

Stonecutter said:
The one with the entrance to Ice Cap? Yes.
Click to expand...

Sonic then boosted in the horizon never to be seen again.

Icarus said:
What would happen if Sega suddenly decides to reboot the Sonic serie by simply erasing everything between since Adventure up to before Mania to create a new official timeline?
Click to expand...

that sorta happened with boom. i... think? but it would be cool. sometimes you just need a new start. and about the actual thread, i like to think sonic mania was an alternate version of sonic 3.

maze master7 said:
that sorta happened with boom. i... think? but it would be cool. sometimes you just need a new start. and about the actual thread, i like to think sonic mania was an alternate version of sonic 3.
Click to expand...

Actually Boom was always meant to be an alternative continuity from the main series, not a "full reboot" to replace modern sonic.
Forces confirmed that as it was a direct sequel to Lost World and Generations.


And if Mania ever replaced Sonic 3&K I'd be a bit upset as it would mean that they're erasing 20% of the classic series' events.

Within the games, there are many different timelines, and Forces muddied the water in regards to whether timelines and dimensions are different things.

Original Timeline: Sonic 1 - Sonic 06. This can also be referred to as the "Solaris Timeline". The timeline ends with Sonic 06, and is the only timeline to contain it. It's also the only timeline in which Solaris exists under natural circumstances. The death of this timeline created the Modern Timeline.

Modern Timeline: Sonic 1 - Present (Forces at the time of this post). Does not contain 06, but has the Rivals and Rush games in it's place. This timeline also exclusively features Sonic 4. Despite being spinoffs, Secret Rings and Black Knight are also canon to this timeline.

Shadow the Hedgehog: Sonic 1 - Shadow the Hedgehog (2005). It contains a number of effectively non-canon endings that never get expanded on in any of the other games, only the true ending is canon in any other timeline. Each of these other endings could be considered their own little bubble timelines we will probably never see again.

Classic Timeline: The Timeline/Dimension created from Classic Sonic's point of view after Generations. Features all the old canon pre-Adventure Sonic games, and has Mania instead of Sonic 4. It crosses over with the Modern Timeline a second time in Forces.

Silver's Future: An odd sort of alternate future separate entirely from CD's Good and Bad Future's that seems to be able to change based on events in the present. It's unclear if Silver is always aware of the changes.

Blaze's Dimension: The world Blaze and Marine are native to, and the home of the Sol Emeralds. It's vague as to if this world is truly separate from Sonic's world, or if it has some connection to Silver's future.

IDW Sonic: The comic timeline. It's separate and distinct from the Game Timeline, but is identical to the Modern Timeline until after the events of Forces, at which point it splits off in it's own direction. Given the ages of characters unique to the comic, it's likely they exist within the game canon as well, regardless of if they end up showing their faces in the games or not.

Sonic Prime (Netflix): Still not much info to go off of right now, but rumor has it it will crossover many of the various timelines within the existing Sonic multiverse.

That's everything canon I'm aware of right now.
You must log in or register to reply here.