​
This new version's entrance is in GreenFlower Act 1. :]
It's the Emerald Shine from the SADX ( I Added the black emerald too ._. )
Thanks to the authors of the Trees that I got from Google.

This wad lets Tails and Knuckles go super!
I Hope everyone will like this add-on!
To make it work, get all emeralds on the pillars.
Stand on the Master emerald to be super :]
The exit is now where you get the token from Greenflower Act 1.

Version 2 Updates :
-Fixed the bugs that was behind the walls.
-New textures, ripped from SADX.
-Updated the skybox.
-Changed the stage name and removed the subtitle.

You do understand that there is no Hidden Palace in SADX, right? Nor is the area you are trying to replicate called "Hidden Palace". The only thing that resembles said area is that there is a bridge connecting to a floating island with a master emerald shrine. The bridge is incorrect, the shrine itself is incorrect, and there are no houses on floating islands in the distance. Please, if you are going to call this the master shrine area from SADX, actually make it resemble said area.

You'll have to excuse my inner Sonic fan for this post because there are just so many problems from every single standpoint that it honestly disappoints me.

First off. This is not Hidden Palace Zone. 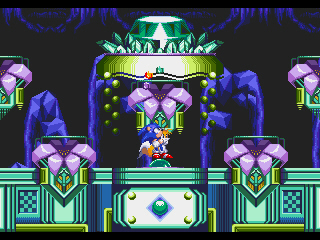 Hidden Palace Zone for one, would be hidden and I don't just mean "lol lets place it in GFZ1 for a secret everyone will know and have access to". Hidden Palace was placed under the ground simply because of fact that it was a hidden palace the deceased citizens of the island kept to themselves to guard from outer world threats. You know, kinda like how in SA1/SADX Eggman shot a LASER to the ALTER SHRINE (Which should be the real name of this level).

On top of that, look at the location of that shrine, what do you see? I don't see water at all. Now you could say this is based on the past version of the shrine, except there is another issue already noticeable in your own version.

Why are there houses on Angel Island? Why is the sky old THZ1? If it's based on the past version why is there any sign of actual industrial civilization when Angel Island was supposed to be in the sky back when the original tribes reigned on the island?

I'm sorry but trying to make it feel special by making your own version of GFZ that adds the entrance to your level, only to have access to an emerald that doesn't do anything at all, is NOT a good enough reason to consider this location a worthwhile visit in ANY scenario besides the one thing you appear to have obviously made it for. You tried to respect the legacies of the "original" Alter Shrine, which is fine, but when you have so much incorrect that the only value in the map's identity is your attempt at making an 8th emerald appear in the game, I'm sorry, but you HAVE to do better than that.

Can we seriously get a second look on maps with no real "goal" in mind when the map, despite it's efforts, has literally nothing of true replayable value in it besides just being a hangout map, like there needs to be an actual tag besides it that lets other players know that it wasn't really meant for the "get to the goal/clear this objective" type of level expectations.

Moderator
Sonic Team Junior
Kart Krew™️
Judge
Panda, I'm sorry that there are members of the community who would rather roast the living daylights out of your map than give actual feedback on it. I'm not a mapper so I don't usually review maps, but here is some actually constructive criticism about your work.

The visuals are decent enough, considering this seems to be your first map. It's nice to see good amounts of foliage placed to make the place look alive, I think that's a good habit to apply to any map. The actual choice in foliage is rather ugly, though. The GFZ flowers don't really fit the setting very well, nor do those terribly poorly-ripped trees. I would suggest finding some bushes and shrubbery to replace the flowers, and trees that are actually sprited rather than ripped from photos. (SRB2 is not a photo-realistic game; the cartoony nature of the characters and the limitations of the palette mean that deliberate pixel art typically looks best.) Though I would prefer something actually rural, the stone textures do look fairly nice. The metal ones do not fit at all though—I'm talking primarily about those pillars on the perimeter and that awful sheeted metal on the ceiling of the altar. Try digging through more of the Castle Eggman textures to see if there are better replacements, or better yet, find or make textures outside of SRB2's default ones. Most of SRB2's assets in general are pretty outdated yet also overused, so using outside textures definitely makes for both a more unique and (hopefully) more appealing experience.

The skybox is a neat idea, though I would agree that it needs a lot more work visually. The THZ background doesn't really make any sense. Either make it plain sky or make a custom background with some mountain ranges in the background, like in the original from SADX. Also, what if you made rural houses/cabins/stone huts instead of directly ripping the GFZ houses? I think that would fit the theme better. I also think having more islands scattered in the background would be a nice touch. Using slopes to make the islands less blocky would be a pleasing addition too. Honestly that could be applied to the map in general—since the aim of the map isn't to run through as fast as possible, players will spend a lot of time looking at the scenery. Give them something smooth and pretty to look at!

As for the stages' purpose—a hangout map is fine, but there are definitely ways to make it more than that. The map letting you access all the Chaos Emeralds from the get go is like a more creative alternative to turnsuper.lua—but what if you could take it further? You could put a secret entrance to Hidden Palace in every act or zone, and have a chaos emerald to collect in each one. It could be a new form of special stage hunting! Of course you'd probably need some Lua to determine which stage the Hidden Palace exit should send you to. Alternatively, you could make the map bigger and have it be a Match/Tag stage. I'd love to run around the Master Emerald chasing other players. Maybe you could repurpose the Master Emerald into a new gimmick, or require players who have all the Match emeralds to stand on it before turning super. There are a lot of different ways you could take this map if you wanted to continue working on it!

That's all I really have to say. Keep on making maps; you definitely know how to use Zone Builder, now it's just a matter of improving and making your work unique and beautiful.

Looks like anything but a Palace, more like an Emerald shrine, regardless you did a good job with the visuals.


Sapheros said:
This is not Hidden Palace Zone.
Click to expand...

Demnyx Onyxwing said:
You do understand that there is no Hidden Palace in SADX, right?
Click to expand...

... I made Tikal's hidden palace that you saw it while you play the story.

I didn't use Knuk's hidden palace for some reasons, Tikal's is more nice than Knuk's, Also you showed me the second photo Sonic 3 Hidden palace which I said on the thread title " SADX Hidden Palace "
Don't worry, It's fine if you made that mistake because I like people who make mistakes, not going to rage.

Also for the other bugs Sapheros said, I'm going to fix them, Thanks for reporting guys.

It's still not hidden palace. Even Lego Dimensions knows the difference between the locations. The Emerald Shrine is just the open air storage location for the Master Emerald.

You did a good job with remaking the shrine yes, but the label/name is what you got wrong.

Right, I fixed everything, if something's still wrong or something that didn't do just tell me.

Moderator
Sonic Team Junior
Kart Krew™️
Judge
What did you change? I can't seem to find anything different about the map.

I really did, Please redownload it again. looks like my internet is.. too lazy to save changes.

Does nothing at all.

I think it was a good idea to rather use SA textures, but my only issue is why do you still include those realistic trees? SRB2 is a pixel art game, not really a realistic one.

Edit: Also please title of this post to be something "Past Tikal Palce", because the title you're currently using is confusing.

Pretty astonishing, even for a 1st or 100th map. The trees need some work but other than that, it's a great addition to any role-play.

I'm currently busy on other stuff Like exams from my school, When I done them I'll head to see the trees' discussion.