Sorry, this isn’t 2.2. We found a couple major issues that prevented certain mods from working, as well as patched over a few netcode exploits. We deemed these important enough to make a new patch for 2.1, because a fantastic mod was made that’s dependent on these. After you download the patch, you should head on over to the KIMOKAWAIII release thread and download that. It’s a massive mod made from various members of the community and has tons of new content for you to play through. It’s well worth your while.

As an update, we are working hard on getting 2.2 together and are building internal betas. We are not quite at the RC stage yet, but we’re getting there, and a whole bunch of stuff we didn’t think we’d actually polish has been getting some serious attention while we wait on the last few major components for the game. For anyone who hasn’t seen it yet, let me share this with you:

Also, because we always do this, changelog:

* Fixed APNG movies in OpenGL recording the game as completely black.
* Fixed FOF with slopes glitching very briefly at level load.
* Fixed PK3 folders being accidentally loaded as textures, which caused crashes sometimes.
* Fixed the game reading data from past the expected end of per-level colormaps, which could cause crashes somtimes. This happened if you made the colormap with some external program that decided to append some text to the end of the lump to tell you how it was made.
* In netgames, only the server or admins are allowed to skip credits now.
* Fixed several PolyObject physics issues:
** If you were standing on a PolyObject following waypoints, walking off its edge teleported you to the ground.
** Sometimes you could collide with thin air below or above some PolyObjects.
** PolyObjects spawned with the "Crush" Spawn point weren't able to crush you properly sometimes.
* Fixed an exploit where players could steal the final hash of a login.
* Fixed ERZ3 and Pipe Towers Zone spitting console errors on being loaded.
Click to expand...

Nice to see another new patch for the game. But one thing I should point out here: You put the changelog on this thread twice.

GliderTheGliscor said:
Nice to see another new patch for the game. But one thing I should point out here: You put the changelog on this thread twice.
Click to expand...

You people keep saying this. What are you talking about?

Sonic Team Junior
Kart Krew™️
I only see it once, so I have no what you guys are talking about.

Only one changelog shows here now, so please disregard my earlier message on this thread.

I literally laughed out loud when I saw "SRB2 2.1.25 release" show up in my RSS feed. I don't even know why I found it so funny. It's not like 25 patches is significantly different from 24 or 23 or whatever.

I had no idea there was a SUGOI 3!! Downloading right now!

Not all of the "srb2-data" packages have been updated on the PPA, so only one version of Ubuntu can get them currently.
U

Which version of Ubuntu would that be?

Nice to see a new update... though I'm a bit upset on the part where 2.2 is STILL not out yet. Though from seeing the "last few components" part, I can tell it's right around the corner.

U.Flame said:
Which version of Ubuntu would that be?
Click to expand...

It's been fixed now so it doesn't matter anymore.

Sryder13 said:
It's been fixed now so it doesn't matter anymore.
Click to expand...

Trying to apt-get update and apt-get upgrade doesn't seem to make it move for me (Ubuntu version: 18.10 {Cosmic} ) 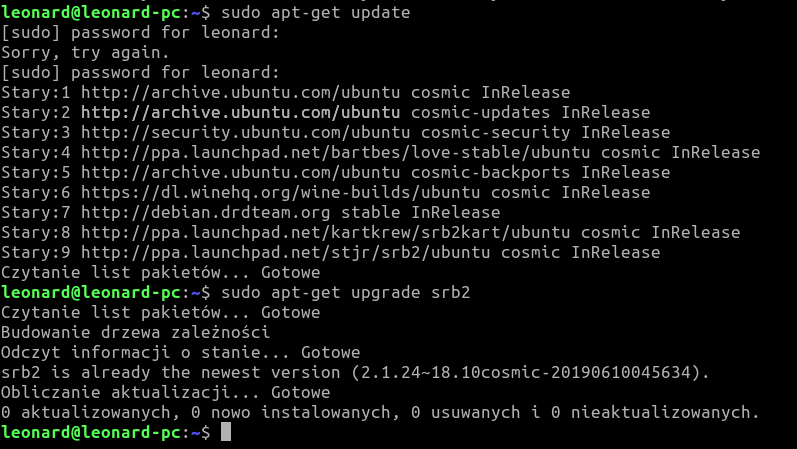 Xkower8181 said:
Trying to apt-get update and apt-get upgrade doesn't seem to make it move for me (Ubuntu version: 18.10 {Cosmic} )

Looks like both the binary and data for cosmic weren't updated. But I can't say why.

Exceptional spritter and sometimes a moron

Well,5 years and 26 updates....
has improved a lot over these years.
Workers coming out, and new ones coming in and so THE GAME LOOKS GREAT!

That logo looks absolutely astonishing if I say so myself. Kudos, artists.

Sryder13 said:
Looks like both the binary and data for cosmic weren't updated. But I can't say why.
Click to expand...

It was probably figured out by now, but cosmic is no longer supported. That's why it's package is still on 2.1.24. Not much I can do but recommend to upgrade, sorry.

Remember when this was new? Me neither!

ClassicNC said:
Remember when this was new? Me neither!
Click to expand...

I'm totally a 2.0 child, it'll always be new to me. Therefore, this topic is from the future... Even if it passed. (Illogical? Yes! But I'm used to being a retrograde)

That's cool, not judging cuz that would be the asshole playing card