What is this exactly? Well, I decided to start a game for The Independent Gaming Source's Bootleg Demake Competition, where you must take a modern game and remake it for an older system spec. It is also "bootleg" in the sense that you cannot use any trademarks; thus you have to change the names, characters, etc. to make them look awkward. After beginning on my entry, I realized that it'd be a waste of time when I could be working on my bigger game engine instead. So what I did was complete this in two nights and submit it as a joke entry, a good 28 days before the deadline. Since the forums are down (and slightly NSFW anyways), I'll just copy the post here.

So without further ado... 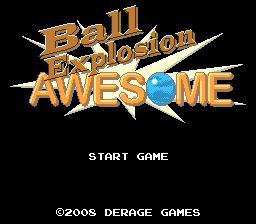 Tagline:
"Do you have the balls it takes to go through several couple devious levels and avoid awesome explosion?!"

Includes Windows binary and (sloppy) source code. I would normally code more neatly than this, but come on! Ball Explosion Awesome!

Move with arrow keys. Try to get to the pad marked "End". Esc to quit the game.

Critical acclaim:
"This game is Satan." -Miya
"I died a few times. Where are my explosions? More irritating than IWBTG." -BlademasterBobo
"What the dieut dueriuer dieurwoiroi? I give up!" -SonicX8000

Is the "You Falled" supposed to be grammatically incorrect?

You missed the entire point, Metalkids. In no way is this an attempt to make anything that's good. Though, it would be nice if you told me exactly how it crashed. I would like to investigate for when I make future games.

Sonic Team Junior
Kart Krew™️
And everone thinks sarcasim gets them somewhere on these forums...

It wasn't sarcasm, I actually like this game...X_X
My only gripe is that the ball doesn't stop moving in one direction even if you have let go of the button long ago. Friction will have to stop it sooner or later...

Sonic Team Junior
Kart Krew™️
Oh, sorry, sarcasim is so hard to tell on the internet. :(

Metalkids said:
This game sucks if I lose The game crashes........
Click to expand...

It would seem, Metalkids, as you would know nothing of the nature of the board.